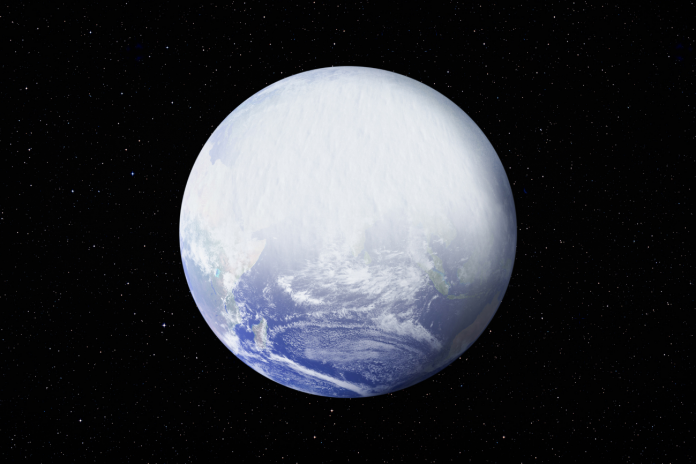 While the thought of ice at the equator may be difficult to imagine, there is compelling evidence that much, if not all, of Earth’s land and oceans were once covered by ice — an event known as “Snowball Earth.”

The rocks of South Australia’s Flinders Ranges contain clues of this extreme ice age. Before tectonic forces worked to lift the mountains from the bottom of the ocean to the heights they occupy today, glacial ice carried boulders from afar and dropped them at the site. The fact that the boulders were deposited within a few degrees of the equator can only mean one thing; At some point in Earth’s history, ice occupied low latitudes.

Analyses of these rocks show that Snowball Earth conditions began about 700 million years ago and lasted nearly 60 million years, ending just before the planet’s greatest burst of new life. But one question has plagued researchers for nearly a century: how did early life manage to survive to that point? With massive ice sheets sealing off water from the atmosphere, the oceans would have had little to no oxygen for inhabitants.

To answer this question, a team of researchers turned to layers of iron- and silica-rich sedimentary rocks known as banded iron formations (BIFs), deposited in the ocean during Snowball Earth and now found in the Flinders Ranges.

“Of all the Snowball rocks, BIFs are the only ones that are like an ice-core — a constant tape-recorder at the bottom of the seafloor that captured clues as to what happened during Snowball Earth,” says Ross Mitchell, a geologist at the Chinese Academy of Sciences in Beijing, China, and lead author of a new study published in Nature Communications.

The BIFs formed when layers of sea ice prevented the exchange of oxygen between the atmosphere and the ocean, allowing iron from underwater volcanic eruptions to build up in the seawater. However, the periodic layers of silica are evidence that pulses of oxygen must have been involved as well.

“Layers like this don’t form when the ocean is completely sealed off with ice,” says Mitchell.

To examine how oxygen could have entered the ocean during Snowball Earth, he and his colleagues measured the extent to which the BIFs became magnetized when exposed to a magnetic field. They discovered that the timing of changes in Earth’s orbit (known as Milankovitch cycles) aligned well with the timing of variations in the rocky layers.

Milankovitch cycles refer to the periodic changes in the shape of Earth’s orbit, along with its tilt and wobble, over tens of thousands of years. The changes affect Earth’s position relative to the Sun and the amount of solar radiation that reaches its surface, in turn influencing Earth’s climate.

One possible interpretation of the newest finding is that Milankovitch cycles caused ice sheets to advance and retreat in rhythm with the changes in incoming solar radiation. This would explain why rocks, such as those at the Flinders Ranges, alternate between the sedimentary layers of BIFs and glacial deposits.

The researchers report that the BIFs were deposited during hundreds of glacial advances and retreats over a period of four million years. “Our new data suggests that the ice retreat opened ice-free areas, allowing oxygen to mix into the oceans and enabling life to persist during Snowball Earth,” says Mitchell.

A glacial “dropstone” with a scratched surface that is linked to the movement of ice. (Credit: University of Southampton)

The theory that Snowball Earth experienced a series of glacial advances and retreats, allowing oxygen to persist in its oceans and in turn enabling life to survive, fits well with an existing one.

During advances of continental ice sheets, the pressure from overlying ice causes melting beneath the glacier. At grounding lines (where ice sheets meet the ocean), meltwater enters the ocean — along with whatever oxygen was trapped inside as air bubbles when the ice formed.

Sediments from around the world contribute evidence that this occurred during Snowball Earth. The process was essentially an “oxygen pump,” similar to what is happening in today’s sub-glacial lakes, says Galen Halverson, a geologist at McGill University in Québec, Canada, who was not involved with the study.

Halverson and his team of researchers examined BIFs in a 2019 study and found that the convergence of oxygen-rich meltwater and iron-rich seawater at grounding lines likely provided enough energy to sustain life during this time. The advance and retreat of ice due to Earth’s orbital cycles could have opened more areas in the ocean and contributed to this oxygen pump at grounding lines during Snowball Earth.

“I can’t see why both [ideas] can’t coexist,” says Halverson. “The BIFs are this critical clue that we have left over from Snowball Earth that can help explain how oxygen existed in the oceans and allowed life such as algae to survive.”

Germany is the biggest economy in Europe. What if it shifts left?