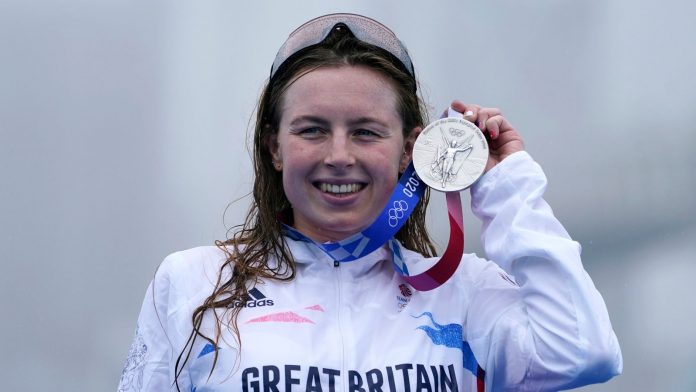 The 27-year-old from Manchester got to the front group of seven going on to the bike leg which proved crucial after the race finally began 15 minutes late because of wet and windy conditions caused by tropical storm Nepartak.

That group had been whittled down to five when, late on the final lap of the 40km and with the weather finally relenting, Taylor-Brown heard a hissing from her tyre.

She lost 22 seconds before setting out on the 10km run and quickly overtook team-mate Jess Learmonth, whose ferocious pace on the swim split the field, and Germany’s Laura Lindemann before passing Katie Zaferes of the United States heading into the final lap.

Gold was well out of reach in the form of the phenomenal Flora Duffy, who became Bermuda’s first Olympic gold medallist.

Taylor-Brown was thrilled with silver as she won Britain’s seventh triathlon medal at the last three Olympics and recorded the best result for a British woman. Katie Zaferes, world champion in 2019, won bronze for the United States.

Taylor-Brown gave a delighted shrug as she stepped onto the podium after having been on crutches just 12 weeks ago with a leg injury.

She had to prove she was fit enough to compete just a week before flying out to Japan.

On her recent injury, the Brit said: “That was probably more stressful than today, because it could have been taken away from me, but I proved that I was fit, I was ready to go, I did more than they asked me to do.

“Obviously it’s strange to come into an Olympic Games not having raced since last September. I got a stress response in my femur 12 weeks ago. So that was a bit of a shock.

“My training had gone so well before then, though, so I knew I had all that in the bag. I wanted to keep it private. You don’t want to show your competitors your weaknesses, and so I did just say I was ill, but I’ve had six weeks of building my running back again.

“It’s not perfect, it’s not what I wanted. It’s not what anyone would want, but I think I got myself into a really good position and I was as fit as I could have been on that start-line today with the circumstances that I faced.”

Taylor-Brown said of the puncture: “I did have a panic. I decided not to stop and change my wheel and just see what happens now.

“I went really hard for the first lap of the run. I suffered after that but it paid off. I was biding my time, I was five seconds off (Zaferes) for quite a while. I didn’t want to push it too soon because I was really suffering but I really wanted to move up and get the silver medal.

“I didn’t have the speed that Flora had today, no way. I’m more than happy with silver.”

Learmonth was happy with ninth while Rio bronze medallist Vicky Holland, competing in her third Olympics, finished 13th and the pair were thrilled for Taylor-Brown.

Learmonth said: “You wouldn’t believe how talented she is. When we came across the line I just cried and I never cry. I just wish everyone would know how amazing she is.”

Alex Yee scorched to Tokyo silver and embraced his status as the heir to the Brownlee brothers’ Olympic throne in men’s triathlon.

Holland added: “I don’t know anyone else who could have done the prep that she’s done in the last 12 weeks and done that in the shape she’s in now and deliver that. Anyone else, I don’t know if they’d even make the start-line. She’s dealt with everything thrown at her like an absolute trooper.”

With Taylor-Brown emulating Alex Yee’s success in the men’s race on Monday, Britain should have an excellent chance of a gold medal when the mixed relay makes its Olympic debut on Saturday.

Duffy, 33, stamped her authority on the race with a fantastic performance over the 10km run to finish in one hour, 53.36 minutes.

The victory, in her fourth Olympics, caps a wonderful career for Duffy, as she becomes her country’s second Olympic medallist after Clarence Hill took a heavyweight boxing bronze in 1976.

Duffy said: “It was definitely a lot of emotion to deal with, it is slowly hitting me. This has been my dream since eight years old – I always wanted to be an Olympic champion.

“There have been many tears, many heartbreaks, many times I wondered if I would ever be healthy again to compete at the top.”

Duffy had been one of the favourites in Rio 2016 but finished eighth, and although she ended that year with a remarkable three world titles in various triathlon disciplines, it was the Olympics crown that had eluded her.

A serious injury in 2018, which wiped out almost an entire year of competition, piled the pressure on but despite barely racing this season she looked fully refreshed in Tokyo.

By the halfway point in the race, Duffy had forged 50m clear and the Bermudan enjoyed every moment of her triumphant charge down the finishing blue carpet, clenching her fists in joy and celebration.