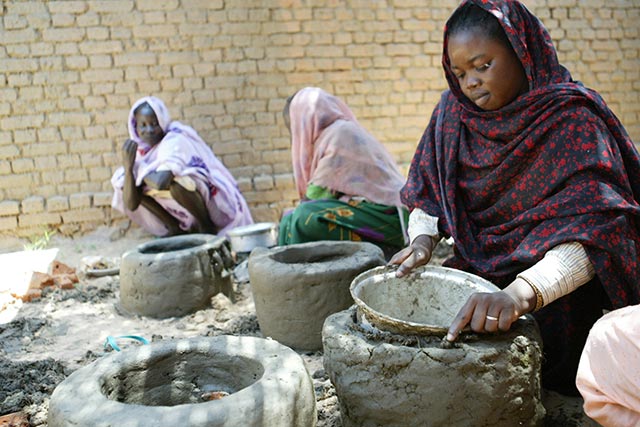 Fuelwood is the main source of energy for the vast majority of people in developing countries and in particular in the Darfur region of Sudan. Access to and availability of this natural resource is increasingly limited and the effects of overexploitation already impact many parts of the region and erodes livelihoods. As a result of the combination of environmental damages and on-going conflict, women have to venture far from their home to collect the necessary firewood to cook, exposing themselves to the risk of physical and sexual violence (in Darfur women travel up to 13 kilometres three times a week to harvest the necessary firewood for cooking). The amount of time women dedicate to firewood collection and water collection adds up and reduces time for necessary child care and other productive tasks.

Fuel-efficient stoves reduces fuel consumption per meal and cuts smoke emissions from traditional fires used inside poorly ventilated dwellings. In addition, the materials used to make the mud stoves are available locally, helping to improve levels of replicability and cost-efficiency of the practice. Local production and sales of fuel-efficient stoves also becomes an income-generating activity for women, while also decreasing the risks of gender-based violence they face when collecting fuel wood.

Evaluation of fuel-efficient stoves in Darfur, confirmed that improved mud stoves have a beneficial impact in terms of enhancing livelihoods, nutrition and health, forest conservation and environmental protection, fighting climate change by reducing carbon emission and reducing sexual and gender-based violence. Using fuel-efficient stoves increases the resilience of the livelihoods of groups at risk, especially for most vulnerable women and internally displaced populations living in camps. Promoted by FAO since 1990s, improved mud stoves are now widely used and training continues to be delivered by partners and local trainers, hence providing a durable solution in protracted crisis situation.