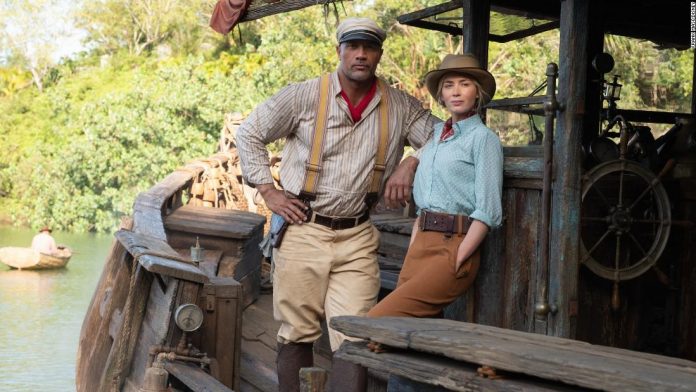 Granted, this sort of exercise needn’t be bashful about borrowing from the best, and the ingredients in this high-spirited gumbo range from “Romancing the Stone” to “The African Queen,” its most direct ancestor.
Inevitably, the film also draws liberally from the ride itself, rattling off a laundry list of terrible puns that the “captains” have been serving up for decades, with even an early shout-out to the back side of water.
Fortunately, those one-liners come by way of producer-star Dwayne Johnson as skipper Frank Wolff, who has a knack for juggling comedy with the action that moviegoers associate with his formidable presence. He also finds a worthy companion in Emily Blunt, who happily is the sort of self-sufficient damsel capable of rescuing herself in times of distress.
Set in 1916, the film opens with Blunt’s Dr. Lily Houghton acquiring a precious artifact, determined to journey into the heart of the Amazon and find something called the Tears of the Moon, a magical tree said to be imbued with “unparalleled healing powers.”
Accompanied by her brother, McGregor (Jack Whitehall), a rare gay character in the Disney live-action universe, she grudgingly hires Frank to ferry them down the river, with a ruthless German aristocrat, Prince Joachim (Jesse Plemons, sinking his teeth into the “Hogan’s Heroes” accent under a Snidely Whiplash mustache), in hot pursuit.
As is practically required in this sort of exercise, Frank and Lily start out really not liking each other, insisting on labeling the other with the unwelcome nicknames “Skippy” and “Pants,” respectively. Over time, there are plenty of harrowing experiences to forge their bond, as well as a supernatural backstory that’s richer and more complex than might have been anticipated for a movie with an inside gag about “Albert Falls.”
Directed by Jaume Collet-Serra (“The Shallows” and Johnson’s upcoming DC movie “Black Adam”) from a script credited to a trio of writers, the film is impeccably designed, conjuring the look of the past with plenty of homages while creating a nicely contemporary feel.
In terms of its more pragmatic pursuit of treasure, “Jungle Cruise” follows the course Disney plotted with “Cruella” and “Black Widow,” simultaneously hitting theaters and Disney+ for a premium fee. Generally suitable for a family audience, there’s really nothing that demands catching an early sailing, so the extent to which people feel compelled to pay for it early — in either venue — will likely be a test of Johnson’s star power more than that of a ride that launched in the 1950s.
As backward as the process might sound, building movies around things like Disneyland rides has become standard operating procedure for studios, and Disney hasn’t been bashful about wading into those waters.
That can’t make “Jungle Cruise” feel inspired, but it does put in context the ingenuity required to navigate those waters and come away with a more enjoyable trip than anyone might have reasonably expected.
“Jungle Cruise” premieres July 30 in US theaters and for a premium fee on Disney+. It’s rated PG-13.