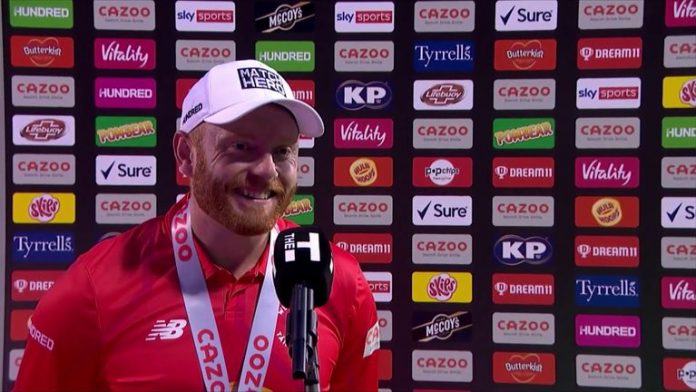 Jonny Bairstow stars with the bat and Jimmy Neesham with the ball as Welsh Fire make it two wins from two in The Hundred; Bairstow hits 72 in last game before linking up with England, while Neesham takes three wickets for five runs in 15 balls, including key wicket of James Vince

Jonny Bairstow signed off from The Hundred in style with a pulsating 72 off 39 balls as Welsh Fire won their second game in a row, with this latest win sealed by Jimmy Neesham’s special spell of bowling…

Fire captain Bairstow – playing his final game before linking up with the England Test team – had struggled to get going early on and was on 26 from 25 balls but then took off, nailing 44 from his final 14 deliveries as the home side posted 165 from their 100 balls in Cardiff having been 86-1 after 67.

Ben Duckett (53 off 34) played his part in a scintillating stand with Bairstow of 116 from 63 balls, while Tom Banton blazed 34 from 23 balls at the top of the order after being inserted by Brave.

But Fire battled back, principally through Neesham, who dismissed Vince and then took two wickets in a five-ball spell late on that went for only one run as Brave ended on 147-7 from their 100 balls.

🗣 “Jonny Bairstow – keep smiling, what a day you’ve had!”

Bairstow had his heart in his mouth on 10 when he pulled Craig Overton to deep square. Ross Whiteley rolled out the full-length dive but was just unable to cling on to what would probably have been the catch of the tournament so far.

🗣 “That would have been one of the catches of the summer!”

🗣 “Jonny Bairstow must have had his heart in his mouth”

SO close for Southern Brave 😨

Whiteley would have been happy at saving the four – but as the innings progressed and Bairstow went berserk, he would have been left ruing not taking the catch, as difficult as it might have been to execute.

Bairstow – who hit 56 off 36 balls against Northern Superchargers on Saturday night – completed back-to-back fifties in The Hundred from 32 deliveries amid four boundaries in five balls off Colin de Grandhomme.

Later in the night, Vince – who has been in electric form both internationally and domestically of late – looked like he could go on to trump Bairstow’s score but then holed out off Neesham with Brave needing 74 from 46 balls.

With Devon Conway out in the previous set of five balls and De Grandhomme out in the next, Brave’s race looked run. Whiteley – who would have been run on two but for a Bairstow fumble – kept Brave in the hunt with 25 off 14 balls but when he chopped Neesham back onto his stumps, that really was it.

They will be one down on power hitters from here on in with Bairstow now departing for Test math duty with England but what a batting line-up Fire have!

Banton ignited early on on Tuesday night, going six, six, four off spinner Danny Briggs during the first five balls and then clubbing Mills for three fours between balls 21 and ball 25.

What a start for the Welsh Fire 🔥

Duckett, meanwhile, is strong, wristy and innovative, with one passage of play seeing him sweep, or reverse sweep, Brave left-arm wrist-spinner Jake Lintott for four fours in a row.

The Welsh team got up to 165 with Glenn Phillips, Neesham, Ian Cockbain, Matt Critchley and Josh Cobb getting a short hit or no hit at all. The depth in the Cardiff team is remarkable.

Bowling-wise, they have the spin of Afghanistan’s Qais Ahmad and with Neesham and Jake Ball – whose 20 balls went for just 21 runs – and David Payne impressing in the seam department, can Fire make a push for the title?

Okay, Lintott’s figures (1-29 from 15 balls) were dented a little by Duckett but he would have relished the occasion, having perhaps thought high-profile nights like this would not come his way.

He was having a great game for the Welsh Fire but Tom Banton is bowled by Jake Lintott after knocking up 34 runs.

The 28-year-old was released by Gloucestershire a few years but having worked his way back into county cricket with Warwickshire, he was then snapped up by Brave as a wildcard pick shortly before The Hundred.

Brave captain Vince showed tremendous faith in Lintott, giving him 10 balls in a row having seen him dismiss Banton with his first.

Welsh Fire captain, Jonny Bairstow: “I love coming to Cardiff. It’s an amazing place and the fans are very passionate. I’m sure whoever the next captain is will do a fantastic job. We have a great bunch of guys and everyone is pulling towards the common goal of winning games of cricket.

“It was a game-changing spell from Neesham and exactly what we needed. That’s why he is in our side. Last game he got 30 off 10 balls, today he got wickets and didn’t concede many runs. I thought the way our boys bowled with a lack of pace suited the pitch better.”

The sides from opposite ends of the Pennines meet on Wednesday with Manchester Originals up against Northern Superchargers at Emirates Old Trafford.

Manchester Originals’ women’s side and Northern Superchargers’ men’s team will be looking for their first wins having begun the competition with successive defeats.