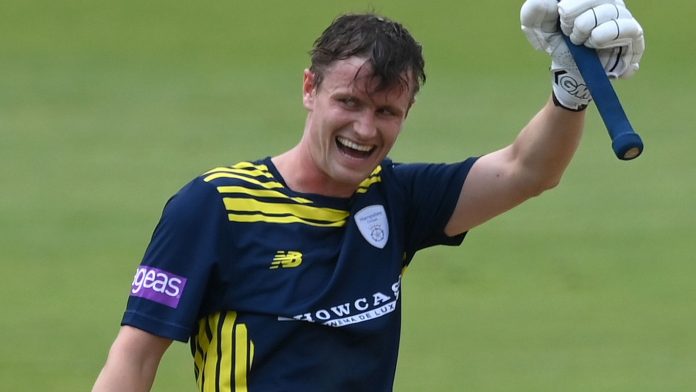 Nick Gubbins scored 131 from 119 balls before taking four wickets in a stunning all-round performance to lead Hampshire to a 98-run victory over Sussex in the Royal London One-Day Cup clash at The Ageas Bowl.

Gubbins struck six fours and five sixes as Hampshire posted 328-7 before then taking 4-28 with his leg-spin as Sussex were all put for 230 in 41.2 overs in reply.

The 27-year-old shared a sixth-wicket stand of 116 with James Fuller, whose 36-ball 54 featured three sixes and as many fours, while opener Tom Alsop also hit 60 off 68 balls for Hampshire.

Sussex’s top-scorer was Travis Head (52 off 48), who was one of the four batsmen to fall to Gubbins – the others being James Coles, Oli Carter and Danial Ibrahim. Hants vs Sussex scorecard

📺 Follow the action live at https://t.co/cNkJ7vdkkn or on the free Hampshire Cricket App 📲 pic.twitter.com/JFhHpvsBdz

In a contest reduced to 30 overs per side, Surrey smashed 23 sixes and 12 fours in their remarkable total of 311-8, with Patel slamming a career-best white-ball score in just his fifth List A game.

Patel reached his century from 59 deliveries on a ground when he had taken a staggering six wickets for five runs in a County Championship fixture against Somerset in 2018.

577 runs and 15 wickets from 60 overs at @GuildfordCC, including an unforgettable century for Ryan Patel! pic.twitter.com/PuzmiaVXmG

Smith was also in brutal form, slamming six sixes in his 19-ball 54.

Elsewhere, Ed Pollock’s maiden List A century powered Warwickshire to an eight-wicket win over Derbyshire as they reached their DLS-adjusted target of 205 with 30 balls to spare in a game reduced to 42 overs due to rain.

Pollock struck 103 from 115 balls, an innings which included 10 fours and one six, and added 121 with Rob Yates (60) for the Bears’ first wicket. Derbyshire vs Warks scorecard

Fynn Hudson-Prentice made an unbeaten 51 for Derbyshire and Harry Came scored 45 but the hosts fell well short of a challenging total having been 82-0 in the 17th over.

Durham skipper Scott Borthwick top-scored with 76 and then delivered a crucial over to secure his side a thrilling two-run DLS victory over Middlesex at Radlett. Middlesex vs Durham scorecard

Borthwick struck 76 in Durham’s total of 288-8, supported by half-centuries from Graham Clark (65) and Luke Doneathy (50), only for Peter Handscomb (75) and Robbie White (55) to put Middlesex on track for victory with a fourth-wicket partnership of 130.

But both fell in quick succession just before rain forced the players from the field at 173-5 from 32 overs – which was enough to push the home side behind under Duckworth-Lewis-Stern calculations.

They returned for a further four-over thrash – with Borthwick conceding just four from his six balls and, despite a valiant flurry of boundaries by Thilan Walallawita (18 off 5), Middlesex fell just short of the revised target of 228.

Plus, Worcestershire beat Gloucestershire by 11 runs on DLS in a rain-affected game in Bristol. Gloucs vs Worcs scorecard

After three interruptions, Gloucestershire were finally set a target of 94 from 11 overs and could manage only 82-4, with Graeme van Buuren making 38 not out from 29 balls and Chris Dent 25 from 13.