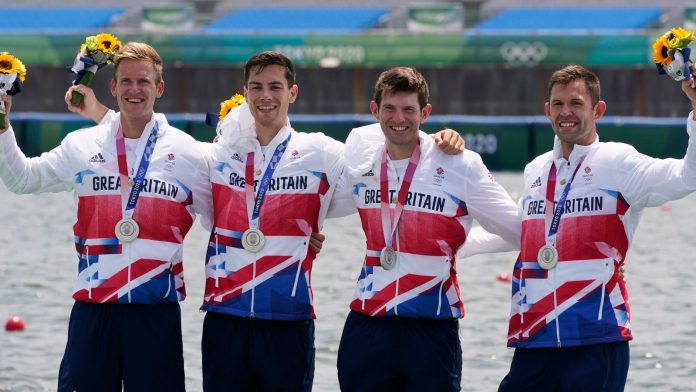 Harry Leask, Angus Groom, Tom Barras and Jack Beaumont secured a silver for Team GB in the quadruple sculls; Graeme Thomas and John Collins finished fourth in the double sculls while there was a shock in the men’s four with GB missing out on a medal for the first time since Atlanta 1996

Great Britain’s run of five successive Olympic golds in the men’s four came to an end before a surprise silver in the quadruple sculls lifted spirits for British Rowing.

From lane one, they rowed a superb race as they finished second behind Holland.

They were leading at halfway but held off the Australians and the Polish to clinch silver.

Their success came minutes after the end of an era in the men’s four, when a run that started at Sydney 2000 by Steve Redgrave, Matthew Pinsent, Tim Foster and James Cracknell was halted.

Team GB were bidding for a sixth straight Olympic title in the event, but after trying to chase down Australia, who set a fierce pace from the start, the team of Oliver Cook, Matthew Rossiter, Rory Gibbs and Sholto Carnegie faded at the end and missed out on a medal altogether.

The British boat briefly left its lane in the closing stages, almost colliding with Italy who finished third behind Romania.

It was the third successive fourth-placed finished for the British team at Sea Forest Waterway.

Graeme Thomas and John Collins narrowly missed out on a medal in the final of the men’s double sculls.

The British duo pushed hard to catch China in bronze medal position over the final stages in breezy conditions but were unable to close the gap.

There was similar agony for the women’s four of Rowan McKellar, Harriet Taylor, Karen Bennett and Rebecca Shorten.

But their disappointment was joy for the Irish quartet of Aifric Keogh, Eimear Lambe, Fiona Murtagh and Emily Hegarty, who won their country’s first medal of the Games by pipping the British women to bronze.

Australia claimed gold in another close finish ahead of Holland.