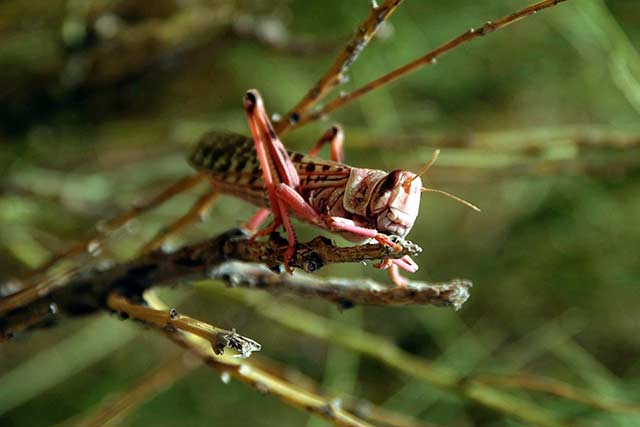 Unusually heavy and widespread rains that fell recently in northwest Africa, the Horn of Africa and Yemen could favour Desert Locust breeding, FAO warned today, stressing that close monitoring is needed over the next six months to prevent the insects from forming destructive swarms.

The locust situation in countries normally affected by Desert Locust remained mostly calm in October with only small-scale breeding activity detected, FAO experts said. They noted however, that this could change, in part due to the impact of El Nino in Africa and the tropical cyclones Chapala and Megh in the Arabian Peninsula and the Horn of Africa.

“Extreme weather events, including torrential downpours, have the potential to trigger a massive surge in locust numbers. Rain provides moist soil for the insects to lay their eggs, which in turn need to absorb water, while rains also allow vegetation to grow which locusts need for food and shelter,” said Keith Cressman, FAO Senior Locust Forecasting Officer. “The effects of a locust plague can be devastating on crops and pastures and thus threaten food security and rural livelihoods,” he added.

After becoming airborne, swarms of tens of millions of locusts can fly up to 150km a day with the wind. Female locusts can lay 300 eggs within their lifetime while a Desert Locust adult can consume roughly its own weight in fresh food per day — about two grams every day. A very small swarm eats the same amount of food in one day as about 35,000 people.

The impact of El Nino and tropical cyclones Chapala and Megh

FAO has been monitoring the situation in northwest Africa where unusually heavy rains fell in late October over a widespread area of northern Mauritania, the adjacent areas of Western Sahara, southern Morocco and western Algeria and southwest Libya.

In the Horn of Africa, above-average rains associated with a very strong El Nino are predicted over northern Somalia during this winter and next spring. If so, ecological conditions will become favourable for breeding on the northwest coast and the Somali plateau. Heavy rains associated with tropical cyclone Chapala fell in southern coastal and interior areas of Yemen in early November, followed one week later by tropical cyclone Megh that also affected northeastern Somalia. The torrential rains which far exceeded the annual average rainfall for the entire year caused flooding and damage.

In the winter breeding areas along both sides of the Red Sea, seasonal rains began in early October, which is slightly earlier than normal. If the rains continue, there would be sufficient time for two generations of breeding to occur this year in the coastal areas of Sudan, northern Eritrea, southeast Egypt, Saudi Arabia and Yemen.

Prevention, mainly through early warning and early reaction, is the key in reducing the extent to which Desert Locust can affect agricultural areas. After unusually heavy rainfall, it is imperative that countries mount the necessary field surveys and maintain them on a regular basis for routine monitoring of breeding conditions and locust infestations. The finding of significant infestations requires control operations to avoid a further escalation in locust numbers. It is critical that the results of survey and control operations are reported quickly and accurately so that swift decisions can be taken to prevent the spread of locusts to other countries.

While these measures are believed to have played an important role in the decline in the frequency and duration of plagues since the 1960s, today climate change is leading to more frequent, unpredictable and extreme weather and poses fresh challenges on how to monitor locust activity.

Whereas locust numbers decrease during droughts, locust outbreaks often follow floods and cyclones. If not controlled, these outbreaks can lead to plagues. Temperature on the other hand governs the speed of locust development and warmer conditions could possibly shorten the incubation and maturation periods and lead to a rise in the number of locust generations in a year.

FAO operates a Desert Locust Information Service that receives data from locust-affected countries. This information is regularly analyzed together with weather and habitat data and satellite imagery in order to assess the current locust situation, provide forecasts up to six weeks in advance and if required issue warnings and alerts. FAO also provides training, undertakes field assessment missions and coordinates survey and control operations as well as assistance during locust emergencies.