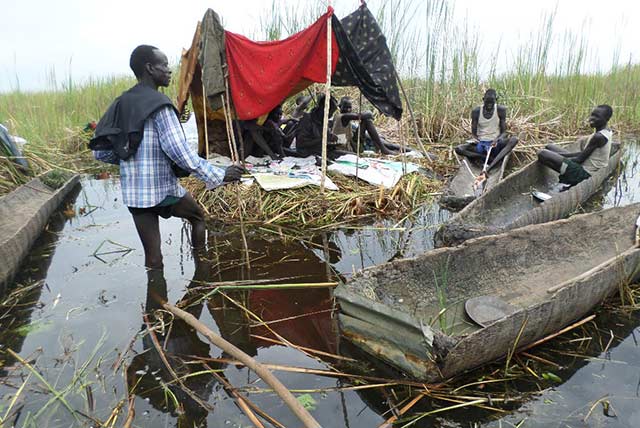 Three UN agencies today warned that extreme hunger is pushing people to the brink of a catastrophe in parts of South Sudan, as a new analysis found that 3.9 million people nationwide now face severe food insecurity.

The United Nations Food and Agriculture Organization (FAO), the United Nations Children’s Fund (UNICEF) and the World Food Programme (WFP) called on the parties to the conflict to grant urgent and unrestricted access to Unity State, where a newly released Integrated Food Security Phase Classification (IPC) analysis shows that at least 30 000 people are living in extreme conditions and are facing starvation and death.

Since the war in South Sudan started nearly two years ago, it is the first time that an IPC analysis has found any parts of the population in phase five (“catastrophe”) on the five-point IPC scale.

“This is the start of the harvest and we should be seeing a significant improvement in the food security situation across the country, but unfortunately this is not the case in places like southern Unity State, where people are on the edge of a catastrophe that can be prevented,” said WFP Country Director Joyce Luma. “The people of South Sudan need peace, nutritious food and other humanitarian assistance and livelihood support to survive and rebuild their lives,” she added.

Unless unrestricted humanitarian access is urgently granted, the agencies said, food insecurity could deteriorate to famine in parts of Unity State, where humanitarian assistance has been hampered by the dreadful violence and lack of access in recent months. Some displaced families say they survive on just one meal a day consisting of only fish and water lilies.

“Since fighting broke out nearly two years ago, children have been plagued by conflict, disease, fear and hunger,” said Jonathan Veitch, UNICEF Representative in South Sudan. “Their families have been extraordinary in trying to sustain them, but have now exhausted all coping mechanisms. Agencies can support, but only if we have unrestricted access. If we do not, many children may die.”

Throughout the country, the IPC analysis indicates that 3.9 million people in South Sudan face severe hunger. Although the number of food insecure households has decreased – as expected – during the harvest season, it is almost 80 percent higher than in the same period last year, as even people living in states not directly affected by the conflict struggle with its  long-term effects, erratic rainfall, depleted livelihood options, high food prices, fuel costs and inflation, in a generally degraded economic environment.

In addition, the IPC highlights that the overall nutrition situation remains critical, with Global Acute Malnutrition (GAM) among children under 5 above the emergency threshold in the conflict-affected states of Jonglei, Upper Nile and Unity in September, and high in Northern Bahr el Ghazal and Warrap throughout the year. The high prevalence is attributed to inadequate food consumption, poor maternal and child feeding practices, illnesses and limited delivery of health and nutrition services.

The three agencies – which work on food security and nutrition – warned that the dire economic situation in the country is contributing to record-high food prices that significantly affect families’ purchasing power and worsening levels of food insecurity. Even areas previously unaffected are now showing signs of severe deterioration, with large proportions of the population in Greater Bahr el Ghazal states in food security crisis.

“Livelihoods have been severely affected by high inflation rates, market disruption, conflict-related displacement, and loss of livestock and agricultural production, said Serge Tissot, the Head of FAO in South Sudan.

“In addition, looking forward to the completion of the 2015 cropping season by  the end of the year, a below average cereal production is expected in Uganda the Sudan and Ethiopia, which will further aggravate the food import bill in South Sudan. By creating ways to support crop, livestock and fish producers the resilience of these communities will be strengthened,” he added.

UNICEF, WFP and FAO, together with other UN and NGO partners, are reaching millions of people with lifesaving food, nutrition aid and emergency livelihood kits. The rapid response missions channel assistance to many remote areas otherwise cut from humanitarian relief. Quick support for local food production contributes to the longer-term food security of the most affected people. The agencies called on the international community to provide the resources needed to sustain and expand those lifesaving efforts.