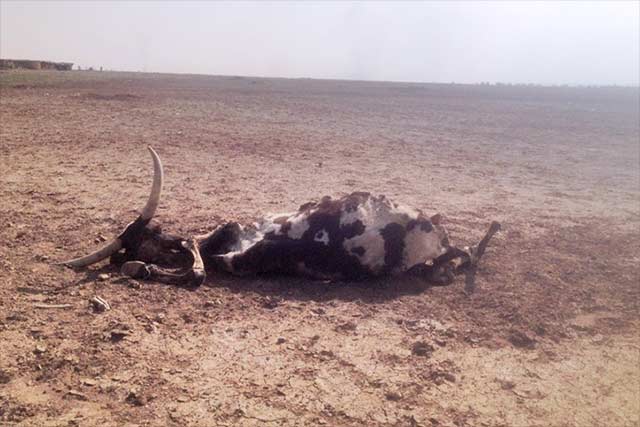 On 25 October, a FAO assessment team visited an internally displaced person camp not far from Dire Dawa in Ethiopia’s Somali Region to better understand how the El Niño-driven drought in the area was affecting local livelihoods. Speaking to some of the camp residents revealed severe livestock losses over the last six months and deep concern about rising malnutrition, particularly among children.

Most of the camp’s 1 400 households had arrived between May and June 2015, having run out of food and seen the majority of their livestock die from lack of pasture and water. The camp’s residents are primarily from the surrounding woredas, with residents noting that in some areas, such as nearby Baralako, 95 percent of local families had sought refuge at the camp.

While the national meteorological authorities have been providing information on weather forecasts and warnings about the impending drought, the camp residents acknowledged that they had not paid much attention to these alerts until their animals began dying.

Meeting the FAO team in groups of men or women, the residents recounted that their animals began dying in March, with deaths peaking in May. In the same period, prices fetched for livestock fell from ETB 1 000 for a male sheep or goat and ETB 750–800 for a female to just ETB 200–300/animal owing to their poor body condition. Sheep and cattle were the first to die, followed by goats, donkeys and camels.

Mariam, a woman from nearby Ilalu encountered by the team as she accompanied her remaining camels back from the nearest water source, told the team that she had lost all of her 100 sheep and goats due to the drought, while she now has just 11 out of her original 50 camels. She had left her home in search of water for her animals at 3 am the previous day and was returning at 11 am the following day with another 3 hours left in her journey.

Those interviewed by the team emphasized the importance of protecting their remaining animals in the short term. While the support received from the Government in the form of feed and livestock vaccinations was appreciated by the camp residents, many felt that the amount of feed provided was insufficient to meet the needs of remaining livestock. The feed distributed was enough for less than 10 percent of households to feed their animals for 18 days. The families chose to divide the feed so that most families in the camp received at least something. However, when shared, the amounts provided were too low to meet the needs of all livestock.

A massive increase in time-critical interventions like feed provision is therefore crucial to keep remaining livestock alive before the families at the camp see their entire livelihood assets wiped out.

If the next rains – due in February 2016 – are at least average, livestock restocking is a key priority for the affected families, enabling them to quickly rebuild their livelihoods. When asked how many and what type of animals would be needed to resume viable livelihoods, the numbers varied from 30 to 40 head. But both men and women emphasized the importance of sheep and goats as they breed relatively quickly and can be sold for cash. The women interviewed particularly highlighted the importance of sheep and goats in providing milk for the family.

As one camp resident said, “sheep and goats are like clothes, you need them otherwise you will be naked, more important than cattle which are like a sheet over your head at night – you can do without the sheet, but you can’t do without your clothes”.

Women play a major role in livestock production in this area and have seen their children suffer from the lack of milk availability. Traditionally, milk is mixed with grains for family meals. Meat, which they would consume on occasion, is also lacking. Many women also earned a small income from making and selling ghee and butter. Now, most families rely entirely on grains provided by the government or WFP and malnourishment is beginning to rise among children. Mariam also noted the importance of restocking so that she could begin to rebuild her herd.