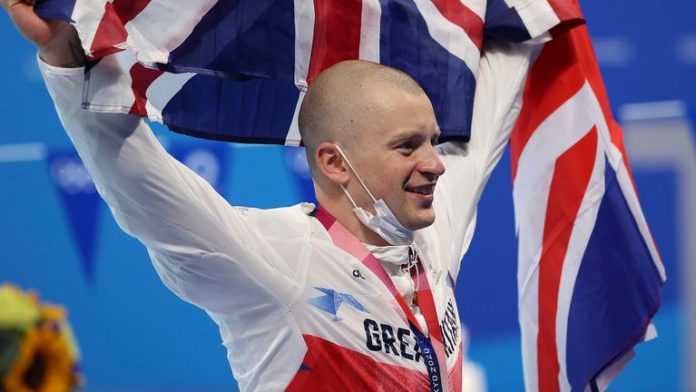 Great Britain produced their most successful start to an Olympic Games in Tokyo this week with at least 10 medals after four days of competition, and they are far from finished.

Adam Peaty became the first British swimmer to defend an Olympic title when he retained his 100m breaststroke crown. He remarkably accounts for the 16 quickest times over the distance in history.

Olympic champion Adam Peaty admits the delay to the Games was difficult to take, but his perseverance has paid off

In one of the great GB stories of Tokyo 2020, Tom Daley and Matty Lee clinched gold in the synchronised 10m platform with a score of 471.81. While Lee was making his Olympic debut alongside his childhood idol, Daley continued a magical story 13 years on from his first Games.

Six months on from contracting coronavirus for a second time, Tom Dean prompted wild celebrations at a family watch party back in Maidenhead at roughly 3am as he edged out close friend Duncan Scott to secure gold in the men’s 200m freestyle.

Watch what happened when Tom Dean’s family and friends gathered in his mum’s garden to cheer him on to victory in the 200m freestyle at the Tokyo Olympics!

Not long since fracturing his collarbone after being hit by a car, Yorkshireman Tom Pidcock became the youngest mountain bike champion in Olympic history as he claimed gold on day three.

Britain stormed to success in the pool and fell just 0.03secs short of a world record with Dean claiming a second gold of the Games – the first British male swimmer to do so since 1908.

While all eyes had been on Jonny Brownlee, it was Alex Shee who shone through to underline his incredible potential with a silver medal in the triathlon while making his Olympic bow.

Georgia Taylor-Brown managed to overcome a puncture before shining in the 10km run to earn a silver medal in the women’s triathlon behind Flora Duffy, who became Bermuda’s first-ever Olympic champion.

It took a stunning display from GB teammate Tom Dean to hold Duncan Scott off as he finished 0.04 seconds behind in the men’s 200m freestyle to ensure a British one-two finish, marking the first time two British male swimmers have shared an Olympic podium since London 1908.

Bradly Sinden was forced to settle for silver in the men’s -68kg taekwondo after relinquishing his two-point lead in the dying seconds of his final against Uzbekistan’s Ulugbek Rashitov.

Following an injury-stricken year heading into the games, Lauren Williams excelled to reach the final of the women’s -67kg only to cruelly miss out on gold after a late flurry from Croatian opponent Matea Jelic.

The quartet led Britain to their first medal of the Tokyo Games at the Sea Forest Waterway, maintaining their lead amid pressure from Australia and Poland, who had to settle for silver and bronze.

There was heartbreak for Bianca Walkden as she missed out on a place in the final of the +67kg women’s taekwondo in the last second of her semi against South Korea’s Dabin Lee, who landed a decisive three-point head-kick to progress to the gold medal matchup. Walkden re-composed herself to return later in the day and fend off Poland’s Aleksandra Kowalczuk for her second successive Olympic bronze.

As the focus was on the Russian Olympic Committee’s battle for gold with a Simone Biles-less USA, the British quartet of Alice Kinsella, Amelia Morgan and 16-year-old twins Jennifer and Gadirova dislodged Italy in third place to win a famous bronze medal, Great Britain’s first in the women’s team event since 1928.

Charlotte Dujardin equalled Dame Katherine Grainger in becoming Britain’s most decorated female Olympian of all time as she collected medal number five by winning bronze in the dressage alongside Carl Hester and Charlotte Fry.

Three Olympic medallists, making the dream happen and giving us so much to be proud of 🇬🇧 #Tokyo2020 #BritishDressage #TeamGB #EquestrianDressage #SupportIsWhatMakesUs pic.twitter.com/uFkqjzyDGT

After success in the team event, Dujardin and her horse Gio teamed up to break up Germany’s hopes of sweeping the podium – they took bronze and with it gave Dujardin a sixth Olympian medal to become Britain’s most decorated female Olympian of all time.