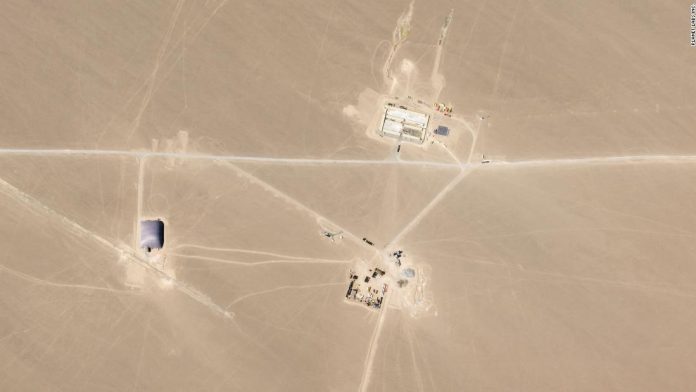 Identified via satellite imagery, the new missile base in China’s Xinjiang region may eventually include 110 silos, said the report released Monday by the Federation of American Scientists (FAS).
It is the second apparent silo field uncovered this month by researchers, adding to 120 silos that appear to be under construction in the neighboring province of Gansu, as detailed by the James Martin Center for Nonproliferation Studies.
Together, the two sites signify “the most significant expansion of the Chinese nuclear arsenal ever,” the FAS report said.
CNN has reached out to the Chinese Foreign Ministry and Defense Ministry for comment on the latest report. Previously, some Chinese media outlets dismissed reports of the missile silo field in Gansu, suggesting it was a wind farm, but the claim has not been confirmed by Beijing.
Adam Ni, director of the Canberra-based China Policy Center, said the discovery of the apparent silo fields is “pretty convincing evidence of China’s intent to significantly expand its nuclear arsenal — in a faster manner than a lot of analysts have so far predicted.”
For decades, China has operated about 20 silos for its liquid-fueled intercontinental ballistic missiles (ICBMs) called the DF-5; now, it appears to be building 10 times more, possibly for housing its newest ICBM, the DF-41, according to the FAS report.
“The Chinese missile silo program constitutes the most extensive silo construction since the US and Soviet missile silo construction during the Cold War,” the report said. “The number of new Chinese silos under construction exceeds the number of silo-based ICBMs operated by Russia, and constitutes more than half of the size of the entire US ICBM force.”
The seemingly rapid buildup has raised questions over whether China is still committed to keeping its nuclear arsenal at the minimum level necessary to deter an adversary from attacking — a policy Beijing has adopted since detonating its first atomic bomb in the 1960s.
The “minimum deterrence” posture has historically kept China’s nuclear weapons at a comparatively low level. The Stockholm International Peace Research Institute estimates China to have about 350 nuclear warheads, a fraction of the 5,550 possessed by the United States and the 6,255 by Russia.
But China’s warhead count has increased in recent years, up from 145 warheads in 2006 according to the institute. The Pentagon predicts the Chinese stockpile to “at least double in size” over the next decade.
“China’s nuclear force posture has evolved steadily over the past 10 years with road-mobile missile launchers recently joined by the nuclear-capable H-6N bomber, a new submarine-launched ballistic missile, and a growing number of static silos, giving China an increasingly robust and survivable nuclear triad,” said Drew Thompson, a former US Defense Department official and visiting senior research fellow at the Lee Kuan Yew School of Public Policy at the National University of Singapore.
In a statement provided to CNN, a US State Department spokesperson described the apparent buildup as “deeply concerning,” noting that it raised questions as to China’s true intent.
“Despite the PRC’s obfuscation, this rapid build-up has become more difficult to hide and highlights how China is deviating from decades of nuclear strategy based around minimum deterrence,” said the spokesperson, referring to China by the acronym for its official name, the People’s Republic of China. “These advances highlight why it is in everyone’s interest that nuclear powers talk to one another directly about reducing nuclear dangers and avoiding miscalculation,” added the spokesperson.

The FAS report said the creation of 250 new silos would move China out of the “minimum deterrence” category.
“The build-up is anything but ‘minimum’ and appears to be part of a race for more nuclear arms to better compete with China’s adversaries,” wrote its authors Matt Korda and Hans Kristensen.
“The silo construction will likely further deepen military tension, fuel fear of China’s intentions, embolden arguments that arms control and constraints are naive, and that US and Russian nuclear arsenals cannot be reduced further but instead must be adjusted to take into account the Chinese nuclear build-up,” they added.
Chinese officials have repeatedly said China will not use nuclear weapons unless first attacked, and that its nuclear forces are kept at “the minimum level required to safeguard national security.”
“This is the Chinese government’s consistent basic policy,” Chinese Foreign Ministry spokesperson Hua Chunying said in January.
Under this policy, China’s nuclear forces needs a credible second-strike capability as minimal deterrence. The idea is to ensure its adversaries that Beijing would be able to respond to a nuclear attack with a powerful counterattack, and thus deter them from attacking China.
But the “minimum” threshold appears to be shifting, analysts say — a point Chinese state media has not shied away from addressing.
“The US wants China to stick to the line based around minimal deterrence … But the minimum level would change as China’s security situation changes,” the Global Times, a state-run nationalist tabloid, said in an editorial published on July 2, after the silo field in Gansu was revealed.
The editorial, titled “China’s nuclear deterrence buildup cannot be tied down by the US,” also advocated for China to increase its nuclear deterrence in light of what it termed “US military pressure on China,” pointing out that the US has “at least 450 silos.”
“Once a military confrontation between China and the US over the Taiwan question breaks out, if China has enough nuclear capacity to deter the US, that will serve as the foundation of China’s national will,” read the editorial.
Ni, the expert at China Policy Center, said the rationale underpinning Beijing’s nuclear strategy has not changed — it is still based on the idea of deterrence, instead of first use. But he noted that Beijing’s assessment of its strategic position has changed amid deteriorating relations with the US — and it is that sense of insecurity that has driven China toward nuclear expansion.
“It feels like it’s in a more perilous strategic situation that it needs to more rapidly arm itself with nuclear weaponry, and the latest discovery of the silos should be put into that context,” he said.

The new apparent silo field is spread over 800 square kilometers (309 square miles) of arid land near the city of Hami in eastern Xinjiang, and about 380 kilometers (240 miles) northwest of the other field in Gansu.
Kristensen, director of the Nuclear Information Project at the FAS, and one of the authors of the latest report, noted that the new silos would be far enough away from China’s coastlines that they could not be struck by conventional cruise missiles fired from US or other warships in the Pacific.
“This will make them targets exclusively for nuclear missiles, mainly Trident,” Kristensen tweeted, referring to the missiles carried by the US Navy’s Ohio-class ballistic missile submarines.
Analysts note that China’s 350 nuclear weapons are spaced out among mobile land launchers — China has about 100 of those, the FAS report says — a small fleet of ballistic missile submarines and its nuclear-capable bombers. So it’s unlikely all of the more than 200 purported new silos would get an ICBM tipped with a nuclear warhead.
Rather, China could play a “shell game” with the missile, moving active missiles among the silos randomly, analysts said after the report of the first silo field.
The silos in both fields are located approximately 3 kilometers (1.9 miles) apart in a grid pattern, meaning missiles could be moved quickly between silos. That shell game also presents a targeting problem for any adversary, analysts say.
Chinese experts, meanwhile, have dismissed the idea.
Song Zhongping, a former People’s Liberation Army instructor, was quoted by the state-run Reference News as saying the use of ground silos was a “clumsy” Cold War practice that had long been rendered “obsolete.” “Now, the emphasis is on mobile launch, and the key is to ensure invulnerability,” he told the newspaper.

In their report, Kristensen and Korda caution the US and other nations about building up their nuclear arsenals to counter increased Chinese capabilities.
“Even when the new silos become operational, the Chinese nuclear arsenal will still be significantly smaller than those of Russia and the United States,” the report said.
And if the US adds to its nuclear arsenal, China can do the same, the report said.
“More nukes are unlikely to fix this and might even make it worse. Arms control is a challenge, not least because China shows little interest,” Kristensen said in a tweet.
Thompson, the expert at the National University of Singapore, said he is concerned about the lack of government-to-government dialogue between Washington and Beijing on the nuclear issue, particularly in light of the change in China’s nuclear posture. Such dialogues are essential for both sides to better understand each other’s doctrines and perspectives, and to reduce the risk of misperception and miscalculation, he said.
In an article last week, Louie Reckford, a policy adviser at Foreign Policy for America, a foreign policy advocacy group, called on the Biden administration to get China to the negotiating table to talk about nuclear weapons.
“It is possible to increase transparency and limit the dangers of nuclear weapons by engaging in consistent arms control dialogue. China bears responsibility for responding to calls for their participation in such talks. But accelerating US nuclear weapons spending will only harden their position. Instead of saber-rattling, the Biden-Harris administration and leaders across the political spectrum should be putting the pressure on China to come to the table. It was a bipartisan tradition to push for arms control during the Cold War. We cannot let that tradition be forgotten at a time when we need it most,” he wrote.

‘What are they going to do? Kill all of us?’: Hear from female activist in Kabul