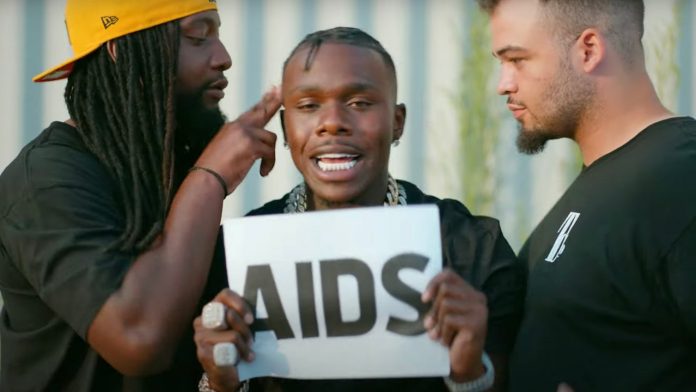 DaBaby has been under fire for comments he made onstage at Rolling Loud Miami on Sunday about gay fans and people with HIV/AIDS. In the new video he directed for his new song “Giving What It’s Supposed to Give,” which was released today, he appears to make two references to his onstage remarks. Midway through the video, he holds up a sign that says “AIDS.” The video ends with a message spelled out in rainbow lettering: “Don’t Fight Hate With Hate.” It continues: “My apologies for being me the same way you want the freedom to be you.”

In addition to DaBaby’s “Levitating” remix collaborator Dua Lipa releasing a statement saying she was “surprised and horrified at DaBaby’s comments,” multiple celebrities have disavowed the rapper for his remarks. Elton John called out the rapper for homophobic statements and “HIV mistruths,” tweeting: “This fuels stigma and discrimination and is the opposite of what our world needs to fight the AIDS epidemic.” Demi Lovato shared an Instagram post decrying DaBaby’s comments.

DaBaby was also dropped by the clothing brand boohooMAN. “boohooMAN condemn the use of homophobic language and confirm we will no longer be working with DaBaby,” the statement read. “Diversity and inclusion are part of the boohoo Groups DNA and we pride ourselves on representing the diverse customers we serve across the globe. We stand by and support the LGBTQ+ community, and do not tolerate any hate speech or discrimination in any form.”