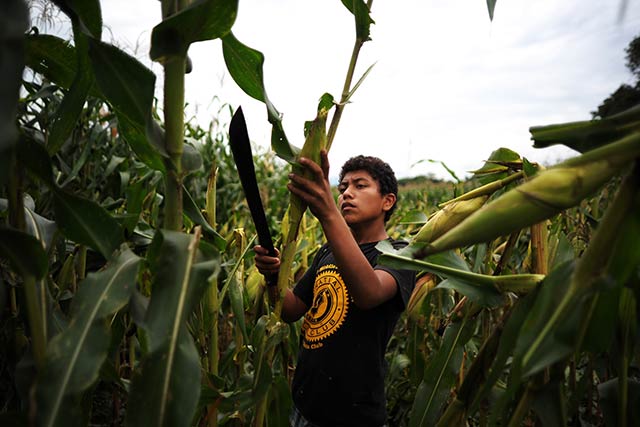 Prolonged dry weather associated with the El Niño phenomenon has severely reduced this year’s cereal outputs in El Salvador, Guatemala, Honduras and Nicaragua, putting a large numbers of farmers in need of agricultural assistance as the subregion tries to recover amidst ongoing dryness, FAO said today. This is the second consecutive year that the region’s main season cereal harvest has been negatively affected by severe dry weather related to El Niño.

The Central American Agricultural Council – headed by agriculture ministers of the subregion – has declared a state of alert after hundreds of thousands of subsistence farmers have suffered the partial or total loss of their crops planted for the main grain season that runs from May to September.

Early estimates from Central America’s main de prima harvest suggest declines of as much as 60 percent of maize and 80 percent of beans due to dry weather caused by El Niño, a weather phenomenon characterized by abnormal warming of surface waters in the eastern Pacific ocean. El Niño-related dry spells are known to delay planting, reduce planting areas and stifle crop development.

With hundreds of thousands of families affected by severe food losses, the governments of El Salvador, Guatemala, Honduras, and Nicaragua have begun distributing agricultural aid packages, including seeds, fertilizers and irrigation pumps, to help farmers recover as much as possible in the second planting season, now under way

Three out of the four countries have also begun distributing direct food aid to help families cope with severe food shortages. “This year’s El Niño’s impacts are even more intense than last’s. After two years of intensifying dry weather, it’s critical that we support farmers to recuperate some of their losses by helping them achieve stronger yields in the second season,” says Felix Baquedano, Economist in FAO’s Global Information and Early Warning System (GIEWS) unit covering Latin America.

At an estimated 3 million tonnes across the subregion, this year’s maize harvest is expected to be far below average and some 8 percent below last year’s already compromised harvest.

Production declines are expected to be particularly sharp in El Salvador and Honduras, which both saw 60 percent of their maize crops destroyed by the irregular rainfall earlier this year. In El Salvador alone, losses are estimated at $28 million in seeds, fertilizers, pesticides and land preparation. Honduras additionally saw 80 percent of its beans perish.

In Guatemala’s most affected areas, some 80 percent of crops are estimated to have been lost, including 55,000 tonnes of maize and 11,500 tonnes of beans, affecting over 150,000 families. While there is still a chance for farmers in the dry corridor to make up for some of those losses of beans in the second season, insufficient rain is likely to prohibit maize from maturing and prevent farmers from recovering those losses.

In Nicaragua, early estimates suggest 50 percent of the total planted area has been damaged, with total crop losses in the country’s most severely affected regions.

Countries across the subregion have increased imports of staple foods from other parts of Latin America to increase availability of food and keep prices stable. In El Salvador, Honduras and Nicaragua, maize prices have remained significantly above last year’s level – with increases of as much as 20 percent in Honduras. Guatemala is the only country in the dry corridor that has managed to bring prices down from August last year thanks to imports from Mexico and improved supplies from the ongoing 2015 main harvest.

In Guatemala, where crop losses have triggered food distributions to some 110,000 families, FAO is supporting the government in building early warning systems and developing management plans, as well as in making seeds and training available to farmers to increase the country’s resilience against the effects of El Niño.

FAO is further mobilizing resources to provide direct assistance to production and to support food and nutrition monitoring systems in Honduras, while continuing to support the government of El Salvador in its long-term strategy to adapt local agriculture to the effects of climate change.

Central America’s “Dry Corridor” is a semi-arid region stretching from the low areas of the Pacific watershed through the foothills of Guatemala, El Salvador, Honduras, Nicaragua and parts of Costa Rica. It covers nearly one-third of the Central American territory and is characterized by recurrent droughts.