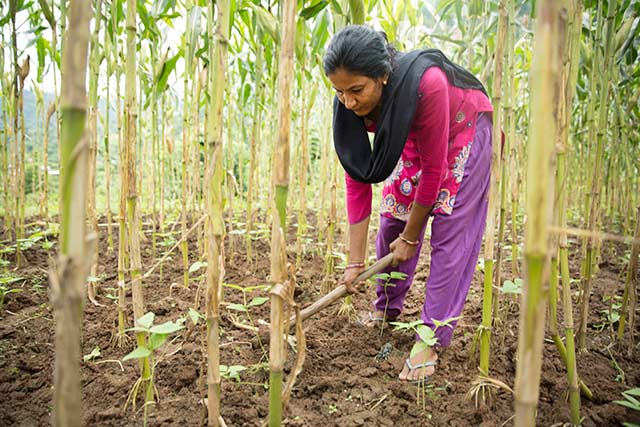 Mira Upreti kneels on the dirt floor in her hut, cooking food on a makeshift fireplace. The corrugated iron roof and walls, and the fire, make the air inside hot and smoky. At night, mosquitos come in through the chicken wire covering the open windows.

Nearby, Mira’s former house is in ruins after the first major earthquake in Nepal, on 25 April. The 45-year-old’s crucial stores of rice, maize, mustard and millet seeds were buried. “After the earthquake, for days I couldn’t think how we were going to survive,” Mira said.

Mira’s husband died some years ago. Since then she has run their subsistence farm in Khairenitar village, Nuwakot district, and cared for her mother-in-law. And Mira is not alone. In the six worst-affected districts—where FAO is focusing its earthquake response—one in four farming households are run by women. Some of these women are unmarried, or widows, or their husbands are working overseas to earn money. These women and their families are often more vulnerable to food insecurity and poor nutrition, particularly after a natural disaster.

As a result, as part of its earthquake response, FAO has identified vulnerable women running farming households and is helping them to resume food production and start rebuilding their livelihoods. Mira’s was one of 65 000 households to receive vegetable seeds; one of 40 000 to receive rice seeds and one of 20 000 to receive feed supplements for livestock from FAO.

Five months after the earthquakes, Mira hopes soon to harvest a crop of paddy rice and some vegetables. “The vegetable seeds we received are really important because without vegetables… we won’t be healthy,” Mira said. Her rice crop, while welcome, will be limited by a lack of water, with the village irrigation system also damaged in the earthquake. Irrigation damage is one of many challenges still facing farmers in the Nepal hills after the disaster.

“I have only been able to transplant rice on three ropanis of land, instead of five, because the irrigation canal was damaged and there wasn’t enough rain,” Mira said. (One ropani is 500 square metres.)

In neighbouring Dhading district, Bhavani Thapalia, 31, is also running a farming household and supporting her elderly parents and a sister. Bhavani’s house also collapsed in the first earthquake and the family is living in a wooden shed.

She received vegetable seeds as part of FAO’s earthquake response, including fast-growing varieties that can be harvested in as little as a month. “For weeks after the earthquake, we couldn’t decide what to do,” Bhavani said. “The family’s future all depends on me and I have no other occupation. I mostly support my family by growing vegetables.

“Eventually we decided we had to rebuild our livelihood through agriculture – we have no other means to support ourselves, so we have no choice.”

Bhavani has already harvested some cowpea from the FAO seeds and is waiting to harvest cauliflower, which will be a cash crop. It is the off-season for some vegetables included in the mixed packet of FAO seeds and she hopes to receive up to four times the normal price for her cauliflower. “Without the FAO seeds, we wouldn’t have been able to grow vegetables at all because we had no money to buy other seeds,” Bhavani said. “We would have had to wait for next season.”