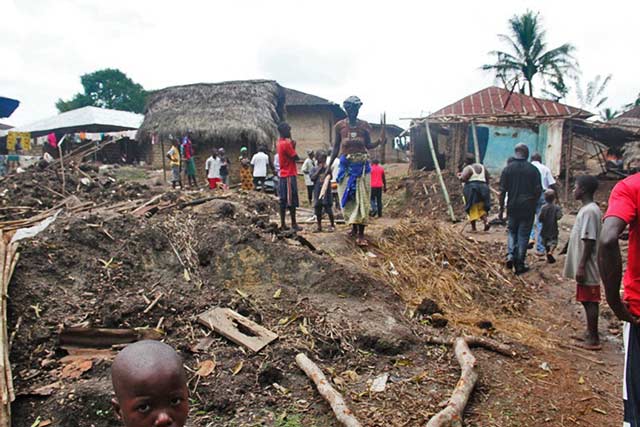 Over one thousand people that have been displaced by flooding in six villages of Bo District, South of Sierra Leone, are in urgent need of food, clothes, medicines and shelter to cope with the traumatized situation that has befell them. The flood victims, most of them depending on agriculture for their food and income, have seen their houses and lands destroyed and flooded by torrential rains. The affected families are now exposed to severe cold and other illnesses as most of them now sleep in school buildings and community centers.

These issues were discerned by an FAO team during a two-day visit to concerned areas from 11 to 12 September 2015 to assess the extent of damage of floods on affected communities.

The heavy downpour which lasted for three days from 4 to 6 September 2015 caused the Hungbayei River in the Bo District to inundate six villages. The floods also affected the main road between Bo and Kenema cities, and for several hours vehicular and pedestrian traffic was cut off at Bebeye Bridge at Gerihun.

This disaster comes at a time that the country is grappling with the multisectoral impact of the Ebola Virus Disease (EVD) outbreak including on agriculture activities and the livelihoods of many. Although there was no reported EVD case in the affected communities, farming and other livelihood activities have been halted following the ban on public gathering, movement restriction and periodic markets that had been temporarily put in place to stop the spread of the disease at the peak of the outbreak.

In Njama Village, all houses were destroyed and villagers are now housed at Gerihun. In other communities visited – Gbonjema and N’jala Kandiema, ninety-five houses have been destroyed, leaving over one thousand people homeless. A statistics report provided by the Bo District Disaster Management Committee shows that a total of 2630 people were affected including 614 women, 1252 school children and 301 under five children. The actual impact of the flooding on the next harvest is still to be assessed, as most plots of rice were still covered by water. However, many farmers complained of losing valuable assets, including food and livestock.

Pa Jusu Kamara, a sixty-five years old farmer from Njama, a village that was completely destroyed by the flood, lamented that he had fifteen cattle but all have been drowned by the flood. “My cattle were my major source of income to take care of my seven dependants because I am no longer energetic enough to embark on large scale farming.” he said.

Pa Jusu explained that the manner in which the flooding took over his village did not allow him to take anything along as houses collapsed indiscriminately. “I am only thankful to God that I am still alive, but as I speak, two acres of rice, which is about six weeks old is been overtaken by the flood.” he lamented. One week after the flooding, Pa Jusu was still dressed in the only gray shirt and tattered Jeans trousers that he escaped with on that fateful day.

Pa Jusu and other members of Njama Village have abandoned their farms as they presently sleep on a tarpaulin in a school in Gerihun. Other flood victims in the neighboring villages share similar trauma. Some of them are been lodged by relatives while others, including children sleep in community centres with no sign of rehabilitation in the short-term.

FAO, in collaboration with non-governmental organizations and the Bo District Disaster Management Committee, is carrying out a comprehensive assessment on the impact of the flooding on the affected communities. This report is expected to be shared with the Government and other partners for possible assistance.