Home Sport Biles: I’m more than my accomplishments and gymnastics 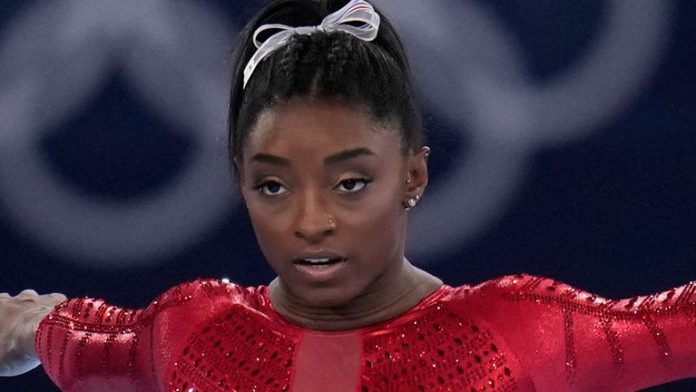 Simone Biles will not compete in Thursday’s women’s individual all-around final “to focus on her mental health”; USA Gymnastics says Biles is yet to decide whether she will compete in her four individual finals next week

Simone Biles has addressed the “outpouring love and support” she has received since withdrawing from Thursday’s women’s individual all-around final at the Tokyo Olympics to focus on her mental health.

The 24-year-old pulled out after one rotation of the women’s team final on Tuesday in Tokyo, citing mental health concerns.

On Thursday, Biles posted on Twitter: “The outpouring love and support I’ve received has made me realise I’m more than my accomplishments and gymnastics which I never truly believed before.”

Biles is taking her participation in Tokyo day by day and is yet to decide whether to withdraw from her four individual finals, which are scheduled to take place next week.

the outpouring love & support I’ve received has made me realize I’m more than my accomplishments and gymnastics which I never truly believed before. 🤍

In a statement, USA Gymnastics said: “After further medical evaluation, Simone Biles has withdrawn from the final individual all-around competition.

“We wholeheartedly support Simone’s decision and applaud her bravery in prioritising her wellbeing. Her courage shows, yet again, why she is a role model for so many.”

After further medical evaluation, Simone Biles has withdrawn from the final individual all-around competition. We wholeheartedly support Simone’s decision and applaud her bravery in prioritizing her well-being. Her courage shows, yet again, why she is a role model for so many. pic.twitter.com/6ILdtSQF7o

Speaking on Tuesday following her decision to withdraw from the women’s team final, Biles explained that she was not injured but had made the decision to “protect” her mental health.

After her opening vault – which scored 13.766, the lowest mark of the first rotation – Biles huddled with a trainer then exited the competition floor with the team doctor.

She returned several minutes later with her right leg wrapped, before taking off her bar grips, hugging team-mates Grace McCallum, Sunisa Lee and Jordan Chiles and putting on a jacket and sweatpants.

Asked if she was physically hurt, Biles said: “No. Just a little injury to my pride.

“After the performance I did, I just didn’t want to go on. I have to focus on my mental health.

“I just think mental health is more prevalent in sports right now… we have to protect our minds and our bodies and not just go out and do what the world wants us to do.

“I don’t trust myself as much anymore… maybe it’s getting older. There were a couple of days when everybody tweets you and you feel the weight of the world.

“We are not just athletes, we’re people at the end of the day and sometimes you just have to step back.

“I did not want to go out and do something stupid and get hurt.

“I feel like a lot of athletes speaking up has really helped.

“It’s so big, it’s the Olympic Games, at the end of the day we don’t want to be carried out of there on a stretcher.

Biles is the most successful US gymnast of all time and won four gold medals and a bronze at the 2016 Games.

She arrived in Tokyo as one of the biggest stars of the Games but struggled, at least by her high standards, during qualifying.

In a social media post on Monday, she said she felt like she had “the weight of the world” on her shoulders and she was finding it “hard” to deal with the pressure of the Olympics.

The 30-time Olympic and World Championship medallist required four podium finishes in Tokyo to become the most decorated gymnast in history, with the first of those now achieved despite her limited participation.

A moment of undeniable strength from @simone_biles. We always focus on the physical aspect of health but the mental aspect is just as important. When you take care of both, you will flourish in life! ❤️🤍💙#SimoneBiles GOAT 🐐

Manchester United and France midfielder Paul Pogba was one of many prominent athletes not involved in the Olympic Games to publicly support Biles’ decision to focus on her mental health.

He said on Twitter: “A moment of undeniable strength from Simone Biles. We always focus on the physical aspect of health but the mental aspect is just as important. When you take care of both, you will flourish in life!”

British Olympic Association chief executive Andy Anson says mental health is more important than ever as he outlines the well-being support Team GB athletes have at the Tokyo 2020 Olympics.

Sally Munday, the UK Sport CEO, says athletes have far more support around them these days to deal with mental health issues

Sally Munday, the chief executive of UK Sport, says athletes are feeling more supported by their governing bodies to protect their mental health.

Speaking to Sky Sports News on Wednesday shortly before Biles withdrew from the women’s individual all-around final, Munday said: “I’ve heard a lot of positive feedback from athletes about what their sports, their governing bodies are doing to support them in this space. I think the fact that we’re seeing so many more athletes talk about it is a testament to that.

“I think there will always be issues where an athlete may not feel comfortable to say something. But I think what we’re seeing is far, far more athletes now willing to say, in the same way of ‘I’ve got a hamstring pain’, that they’re saying ‘mentally, I’m not feeling in a great space right now’.

“There’s people there now that are wrapped around the athletes to make sure they can do that and that they get the support that they need.”