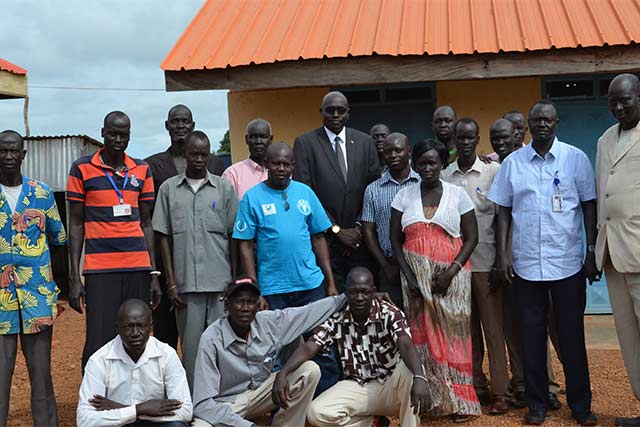 The Food and Agriculture Organization of the United Nations (FAO) has a longstanding history in South Sudan, with both humanitarian and development programmes dating back to the pre-independence era. As part of FAO’s wider goals to end hunger, malnutrition and poverty in rural areas, efforts to build resilience of livelihoods in South Sudan is among its strategic objectives. One of the activities under this strategic objective is support in developing the capacities of livestock service delivery systems at all levels throughout the country.

In South Sudan, cattle are a symbol of status and wealth and most pastoral communities rear livestock to provide subsistence products (milk and meat), to meet social obligations (bride price, stock alliances and stock patronages) and to insure against disaster (drought, epidemics, raids). Livestock products contribute to subsistence in two ways: directly, via milk and meat for home consumption; and indirectly, via sales to generate cash or exchanges for cereals and other crops. South Sudan’s livestock population is estimated at 12 million cattle, 20 million sheep and 25 million goats according to the National Ministry of Livestock and Fisheries Industry, making it a world leader in terms of animal wealth per capita. Despite its enormous livestock wealth, its contribution to the country’s GDP remains low.

FAO with financial support from the Swiss Agency for Development and Cooperation (SDC) successfully tested the Farmer Field School (FFS) approach in 2009/2010 and prescribed it as an appropriate extension approach for improvement of farming practices in South Sudan. Today, within the scope of FAO South Sudan’s Country Programming Framework, SDC-supported activities focus on improving food security, livelihoods and income generation for vulnerable, but economically active agropastoralists in the two target states who rely on crop and livestock production.

Community Animal Health Workers (CAHW) and other livestock workers play an important role in the provision of basic veterinary and livestock production services for their communities at the county level. In order to strengthen these extension providers’ networks, FAO organized a three-day workshop in Northern Bahr el-Ghazal and Warrap States, with the goal of improving livestock service delivery to the agropastoralists in the area. The workshop focused on milk production, processing and hygienic handling as well as pasture management, fodder production and forage preservation. A total of forty participants from the State Ministry of Animal Resources and Fisheries Industry and NGO partners in both states completed the Training of Trainers workshop and will become trainers of agro-pastoral field school (A-PFS) facilitators who train the A-PFS members in the various communities. This initiative is part of a FAO project funded by SDC, entitled “Improved food security and livelihood development for agro-pastoral communities in Northern Bahr el-Ghazal and Warrap States”.

The FAO-organized workshop aimed to improve livestock production practices in order to boost livestock productivity for pastoral communities, thus improving their food security and enhancing income generation from livestock. Key to this has been interest of livestock-owning communities and service providers.

As noted by FAO’s Livestock Officer and training facilitator, Julius Lonyong, “The commitment shown by the participants in this workshop implies that they want to be empowered, so that they can provide the services required to bring change to the livestock sector. This change can move this country in the direction of economic development.”

Ultimately, the project aims to benefit 7 050 households or approximately 50 000 people in the selected states, while building the capacity of government and state extension workers to positively impact food security, nutrition and poverty among agropastoralists in South Sudan. Women and youth are the primary target groups of this project and more workshops are being organized during 2015.

The workshop launched on 29 July and during his opening remarks Hon. Lual Lungar Adhal, Minister of Animal Resources and Fisheries Industry in Warrap State, urged participants to learn as much as they could about animal production and encouraged them to take their knowledge to their communities in the counties and payams.

Warrap State Director of Extension in the Ministry of Animal Resources and Fisheries Industry, Andrea Adup Akoch wrapped it up: “Here in Warrap State, most of the inhabitants are livestock keepers. We are proud of our livestock in Warrap State, so our animals are very important for us, without our cattle we cannot live.  If we handle these animals well and increase their production, we will be able to eradicate hunger in our state”.