Home Top News Central Africa sets out its roadmap towards the eradication of the ‘Peste... 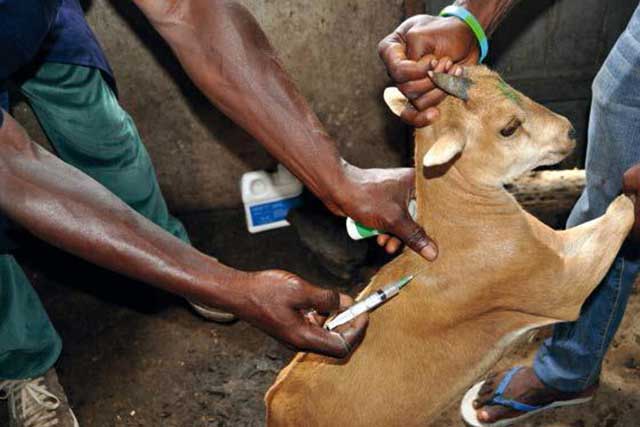 Cameroon’s capital hosts two meetings that started on 24 August and which bring together about 40 participants, including Heads of Veterinary Services, Directors of laboratories and officials of epidemiological surveillance services from Cameroon, Central African Republic, Chad, Congo, Democratic Republic of Congo, Equatorial Guinea, Gabon, and Sao Tome and Principe.

FAO and OIE, in collaboration with the Ministry of Livestock, Fisheries and Animal Industries of Cameroon, is organizing two successive events from 24 to 28 August 2015 in Yaoundé, Cameroon: the Central Africa Road Map Meeting for the Control and Eradication of Peste des Petits Ruminants (PPR) (24-25 August 2015) and the Second RESEPI & RESOLAB Networks and Directors of Veterinary Services Technical Meeting for Central Africa (26-28 August2015).

Experts from FAO, OIE, the Pan African Veterinary Vaccine Centre, the Interafrican Bureau for Animal Resources of the African Union, the Economic Commission on Cattle, Meat and Fish Resources and the Istituto Zooprofilattico Sperimentale delle Venezie, Italy, participate in the meeting along with veterinary schools of Cameroon and Senegal.

“Livestock is a source of income to some 70% of the rural population and contributes significantly to the fight against poverty by providing opportunities for wealth creation and employment. In fact, the latest re-evaluation of the contribution of the livestock sub-sector by the National Institute of Statistics of Cameroon revealed that this contribution has increased from 2% to 5.5%”, said Dr. Taïga, Cameroon’s Minister for Livestock, Fisheries and Animal Industries, at the opening session.

“Through the collaboration with FAO, the production capacity of the National Veterinary Laboratory (LANAVET) has outrun the demand in vaccines in Cameroon, and so we go beyond our borders to cover the needs of some West and Central Africa countries. This collaboration also contributed to the formulation of the National Strategic Plan against Peste des Petits Ruminants, and Cameroon will spare no effort in contributing towards addressing this great global challenge”, concluded the Minister.

The Central Africa road map meeting for the control and eradication of PPR is in line with the outcomes of the Abidjan meeting in March 2015.

From 31 March to 2 April, FAO and OIE, in collaboration with the Government of the Republic of Côte d’Ivoire, organized an International Conference for the Control and Eradication of Peste des Petits Ruminants in Abidjan. The Conference brought together government delegations, experts, scientists, directors of Veterinary Services, and development partners (technical and financial) from all continents, which led to the adoption of the Global Strategy for the Control and Eradication of PPR.

“The strategy includes among others the setting up of regional roadmaps and annual regional meetings, if possible, to call on countries to work in a harmonized and synchronized way in the fight against the disease,” said Mr Bukar Tijani, FAO Assistant Director-General and Regional Representative for Africa.

“One of the recommendations of the Abidjan Conference calls on all countries to participate in subregional meetings to ensure continuous assessment and monitoring of the situation of PPR and a harmonized implementation of the Global Strategy for the Control and Eradication of PPR”, he recalls. Taking the concerns of Cameroon and other countries in the region into consideration.

The Central Africa sub-region currently has nearly one eighth of the total human population of Sub-Saharan Africa which is expected to rise from 105 million in 2010 to nearly 145 million in 2025. The contribution of livestock to the agricultural GDP of the countries in the region varies from 1 to 40%, depending on the countries, with a cattle population of over 22 million head, 36 million small ruminants, 6 million pigs, 3 million camels and more than 100 million poultry.

Due to a large availability of water, the abundance of pasture and agricultural by-products used in animal feed, the region has great potential for livestock farming.

One of the main factors hindering animal production is the existence of infectious animal diseases such as PPR, which is a disease with a high morbidity and mortality rate, killing nearly 80% of animals in some cases. It is a serious obstacle to increased production of small ruminants in all the countries where the disease is raging. Furthermore, it makes access to lucrative markets difficult.

PPR does not only affect families that raise sheep and goats, but also all the actors involved in the processing and marketing chains of animal products. Poor farmers are hit by the economic losses caused by PPR as they only have few animals left for their subsistence.

With 6 million cattle, 7 million small ruminants, 1.7 million pigs and 45 million poultry, Cameroon has a large and diverse potential for livestock farming. Livestock which provides income to 30% of the population plays an important role in the national economy, in food safety and in strategies to fight poverty, and contribute to wealth creation and employment.

Strengthening the exchange of experience and skills

The meeting for Animal Health Networks brings together the focal points of the laboratory networks (RESOLAB) and epidemiological services (RESEPI) as well as directors of Veterinary Services in Central Africa. Animal Health Networks in West and Central Africa are a joint initiative of FAO and the Animal and Plant Health Inspection Service (APHIS) of the United Stated Department of Agriculture.

This year’s meeting will provide an opportunity to take stock of the functioning and activities of the Animal Health Networks in Central Africa. It will also put into perspective the role of RESEPI and RESOLAB networks in the implementation of the roadmap for the eradication of PPR.