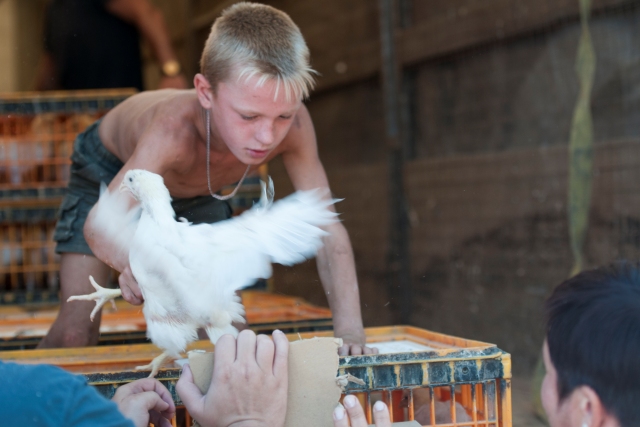 A total of 7,000 three-week-old chickens are being distributed this week to small farms in Donetsk and Luhansk regions. Provision of the birds is the latest move by FAO to help vulnerable households whose livelihoods have been compromised by the ongoing conflict in eastern Ukraine.

The dual-purpose chickens – which can be raised for either meat or egg production – are going to 350 beneficiary households in the Artemivskyi rayon of Donetsk region, and in the Popasnyanskyi rayon of Luhansk region. Each family will also receive 200 kilos of specially formulated chicken feed, sufficient for three months after which the birds will be ready for slaughter. Families that choose to keep the hens for egg production can expect them to start laying about five months from now.

The conflict in Donetsk and Lugansk regions has severely affected the agricultural sector. Many farming enterprises reported losing part of their winter wheat harvest last year, and spring crops in many areas could not be planted due to fighting. Fruit orchards have been damaged due to shelling, and farm machinery has been affected by shelling or theft.

In the case of livestock, many families slaughtered their animals for fear of losing them in the fighting, or because landmines made it impossible to rely on pasturing and they could not afford to buy feed.

“In providing these and other farming inputs, our goal is to safeguard the food security and livelihoods of the most at-risk families improve nutrition and prevent further economic losses due to the conflict,” said FAO emergency response coordinator Farrukh Toirov.

Recent intensification of the conflict has had an impact, he added, noting that the living conditions, food and nutrition security of the people living in the conflict buffer zone are deteriorating.

Last week FAO started distribution of livestock fodder to the most vulnerable families residing in the conflict buffer zone in Donetsk and Luhansk regions. This programme envisages distributing a total of 500 metric tonnes of livestock fodder in villages located along the conflict line. Some 5 000 households are selected to receive this assistance. Earlier in the year, 1 000 vulnerable and food-insecure households each received 100 kilograms of potato seeds.

In all cases, farming households selected to benefit from FAO assistance are selected in consultation with local authorities. Many currently are relying on food aid from the international and local organizations.

“FAO’s assistance is designed to put vulnerable families in a position to help themselves,” said Toirov. “We are trying to help as many people as possible, but the number of households in the conflict buffer zone who need assistance with farming inputs is enormous. Our project is covering only a small number of them. Donor assistance is needed to scale up the operation and reach more significant numbers of the most vulnerable.”