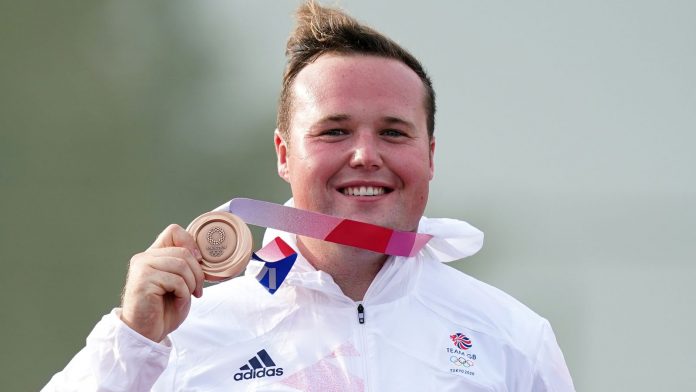 Matthew Coward-Holley has won a bronze medal for Great Britain in the men’s trap shooting final.

The Brit finished on 33/40 as Czech pair Jiri Liptak and David Kostelecky battled it out for the gold medal.

The Chelmsford shooter had arrived in Japan as one of the favourites for gold as the world and European champion but could not match the Czech duo.

Coward-Holley, 26, has replicated the third place finish secured by Ed Ling at the Rio Games five years ago.

Liptak won gold and Kostelecky claimed silver after a dramatic shoot-off for the Olympic title.

Liptak would ultimately come out on top when Kostelecky missed his seventh shot.

Coward-Holley had made a shaky start, making only seven of his opening 10 shots, but then responding with 14 in a row to get back on track.

That run ended just as early pace-setter Jorge Orozco Diaz began to falter, with the Mexican ultimately finishing fourth after missing three shots in a row during the elimination period.

Reflecting on his bronze medal, the Brit said: “It’s a little bit of a mix of emotions. I’m a little bit lost for words. It’s my first Olympics so to come away with a medal, it’s phenomenal.

Coward-Holley claimed a double trap bronze at the 2016 European Championships, and made the transition to single trap in 2017 when the former discipline was removed from the Olympics.

He became the first Brit to win a world title in an Olympic shotgun discipline with trap gold in Italy in 2019 and has now followed that up with a podium place in Tokyo.

Britain are now up to 18 medals and are sixth in the medal table following Coward-Holley’s bronze and a silver for Mallory Franklin in the women’s C1 Canoeing final on Thursday.