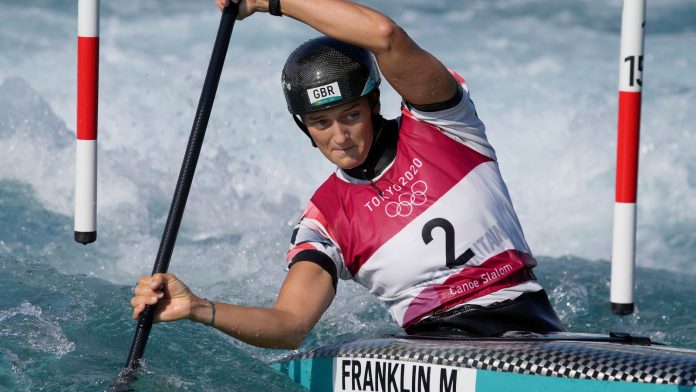 The 27-year-old recorded a time of 108.68 in the final of the women’s C1 canoe slalom and was only beaten by the world No 1 Jessica Fox

Mallory Franklin has won a silver medal in the women’s C1 canoe slalom and added to Team GB’s tally at the Tokyo Games.

She recorded a time of 108.68 in the final, beaten only by the world No 1 Jessica Fox, who was last onto the course and recorded an exceptional time of 105.04.

Franklin is a former world champion and multiple medallist at all levels, but had been denied a shot at Olympic glory before as the category was not included at the Games.

The 27-year-old is just the second British woman in history to win a canoe slalom medal, after Helen Reeves took bronze in the K1 in Athens in 2004.

Franklin had qualified fastest from the heats, but a mistake on an upstream gate during her semi-finals saw her through to the final in sixth.

The four paddlers before her in the final all posted disappointing times, but Franklin was smooth and fast from the start. Her only mistake came when she picked up a two-second penalty for hitting gate 15.

She took gate 19, which had caught her out in the semi-finals, perfectly and crossed the line with the second fastest time of the competition, marginally outside her heat run.

A nervous wait followed as five further athletes took to the course, including the last being the world No 1 Fox.

Franklin remained in the gold medal position throughout, before Fox flew down the course. The Australian delivered a stunning run of 105.04 and at her fourth Olympics, claimed the ultimate prize.

“It’s really cool to have the medal and I think it can mean so much for people,” Franklin reflected after her final.

“I hope that people see the women’s C1 as an event that is really high-class with some amazing paddling out there.

“I definitely remember the touch [of the gate],” she added about her final run. “I was a little bit present with what was going on at times.

“It was really cool, so stressful being sat up there on the start line but I had a moment where I was like, ‘this is actually really cool, I wouldn’t want to be anywhere else right now’.

“The camera was panning round me and I caught a glimpse and smiled, it just reminded me of the environment and how crazy it all is, but it’s just really cool.

“For me personally, I’ve had some struggles with my finals this year so to put down a run of that quality, even with the touch, was amazing for me and that’s mainly what I take away.”