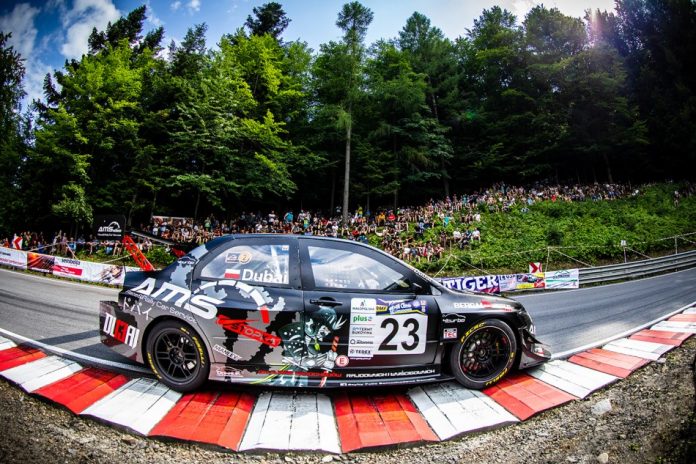 The Polish leg of the FIA European Hill Climb Championship in Limanowa was marked by a clear supremacy of the local drivers in Category 1 of the so-called ‘closed cars’. In Category 2, Christian Merli clearly won, setting a new course record in the process.

After the cancellation of the Slovakian event a week earlier, due to safety deficiencies revealed during the practice heats, the FIA European Hill Climb Championship took place in Limanowa, Poland.

The Polish race was remarkably well organised and, due to the few interruptions, even finished relatively early (3.40 p.m.) on Sunday afternoon, with a large and enthusiastic audience.

Described as fast, the 5.5 km course has the particularity of a surface that is known to be slippery in its first half, then more grippy in its second section, which is a headache for the set-up of the cars.

Simone Faggioli (Norma M20 FC Zytek) admitted that he had never found the right set-up and was all the more disconcerted that his times this year were less convincing than those he achieved in 2019. Christian Merli (Osella FA30 Zytek), on the other hand, had defined a set-up that gave him full satisfaction and confidence, to the point that he managed to break the 1’50” barrier for the first time in the history of the event during the second race!

Czech driver Petr Trnka (Norma M20 FC Zytek) continued to impress in his first season in the 3-litre V8 category, and took a convincing third place overall. Third after the first climb, Diego Degasperi (Osella FA30 Zytek) lost his footing in the second run due to a bad choice of tyres, and finished fourth. But he is now sharing the third position in the Championship with Sébastien Petit (Nova NP01-2 Zytek), who had to retire in Limanowa due to engine problems.

In Category 1, the long-awaited confrontation between the Swiss Ronnie Bratschi and the pack of other supercharged Mitsubishi Lancers that usually dominate in Poland unfortunately did not take place. The Swiss driver suffered a mechanical failure in the second practice heat, followed by a small impact that damaged the front end of his car. The Poles, who are keen to turn touring cars into “Bergmonsters” and are among the drivers who have most embraced the “Performance Factor” concept (the Pf is applied in their national championship), hogged the top 5 final places in Category 1, also winning Groups 1, 2 and 3.  Daniel Stawiarski clearly won the overall classification – and Group 1 – with his Mitsubishi Lancer Evo IX, ahead of the Lancer of “Dubai”, winner of Group 2, and the Ford Fiesta of Piotr Parys, winner of Group 3. Peter Ambruz (Mitsubishi Lancer Evo IX) from Slovakia won Group 4, and Norbert Nagy from Hungary won Group 5 with his BMW E36. In the provisional Championship standings, Italy’s Antonino Migliuolo (Mitsubishi Lancer Evo IX), who finished second in Group 3 in Poland, remains in the lead, ahead of Slovenia’s Ales Prek (Honda Civic Type R), who nevertheless has one less participation in the whole season.

The Championship will continue on 28-29 August in Slovenia at Ilirska Bistrica and will finish on 18-19 September in Croatia at Buzet.

Ranking of the Limanowa event: here.