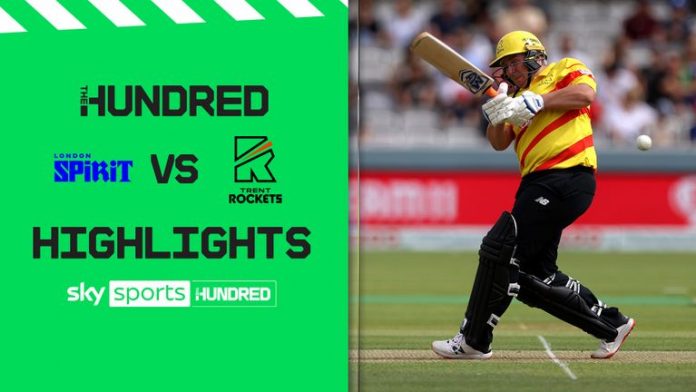 Opener Priest hits 76 from 42 balls and Nat Sciver chips in with 32 off 16 as the Rockets post 151-4 -the highest Hundred score to date; Spirit fall to second defeat in three games as unconvincing run chase falls 18 runs short

Rachel Priest put two failures behind her to blast Trent Rockets to their first Hundred win at the expense of London Spirit at Lord’s.

The Rockets became the first women’s side to pass the 150 mark – and more than half their runs were scored by their unforgiving Kiwi opener, Priest taking advantage of one dropped catch to score 76 off 42 before holing out looking to go big again.

A classy Nat Sciver cameo saw the visitors surpass the highest women’s score to date despite Spirit putting the brakes on at the death, while Priest’s 101 stand with Sammy-Jo Johnson set a new mark for best opening partnership.

The home side never really made a convincing case that they would chase down the 152 needed for a second win despite some generous Rockets fielding as sitters were missed off Heather Knight and Deandra Dottin.

Wickets fell regularly as all seven Rockets bowlers performed with discipline, skipper Knight among those to fall attempting to hit St John’s Wood High Street as the Spirit pursuit eventually ended on 133-7.

A simple decision. Priest had managed just eight runs in two innings coming into this one, but 162 New Zealand caps are not tossed around lightly, and the now-retired Kiwi rediscovered the clean hitting for which she is known.

Is that the match? 🤔 Knight departs when they need her most… #LondonSpirit 🔵 #TrentRockets 🟡 #TheHundred 💯

Cow corner took a peppering as Priest cleared the rope four times, but it was not brute force alone, one late cut off Danielle Gibson calling to mind her compatriot Kane Williamson.

It was not the show-stealing entrance the England opening batsman might have hoped for as her drop in the deep gave Priest a life on 40. She did hold onto a more difficult chance to deny Priest a ton which looked there for the taking, but the spill cost 36 runs – almost three times as many as Beaumont managed with the bat as she miscued to mid-on in frustration after six straight scoreless balls.

Beaumont’s failure to cling on when Priest was in full flow is an obvious contender, but having restricted the Rockets to just 26 in the powerplay, London’s good work was almost immediately undone.

Chloe Tryon took the ball and delivered a chest-high full toss first up. Priest saw it early, connected perfectly and had the first of her maximums. She never looked back.

Rachel Priest’s 72 runs helped guide the Trent Rockets to their first win of The Hundred, and she was delighted her side was able to get up and running in the competition

Rachel Priest: “It was nice to finally get some runs under the belt. The games come thick and fast – hopefully I’m in a bit of form now.

“We all know we can score runs, it’s just getting them under the belt. I had a clearer head today and it came off for me.

“In a shorter format anything can happen, and what a place to get our first win.”

Rockets captain Nat Sciver: “That’s what she [Priest] can do. That’s usually how she plays the game. When I play against her, she usually whacks me all over the shop so I’m glad she’s doing it to someone else now. We’re glad to be off the bottom of the table and hopefully we can bring that into the next game.”

Friday brings the return to the fray of Southern Brave, whose men’s and women’s teams have had polar opposite starts.

A double-header against Birmingham Phoenix at the Ageas Bowl represents a chance for Anya Shrubsole to mastermind a third win from three matches, while James Vince’s team are yet to get off the mark after back-to-back defeats.

As for the visitors, both sides have won once and lost once. The men’s batting line-up has plenty to prove after being spun out by Manchester Originals’ Matt Parkinson last time out, but the momentum is with the women after their win at Old Trafford.