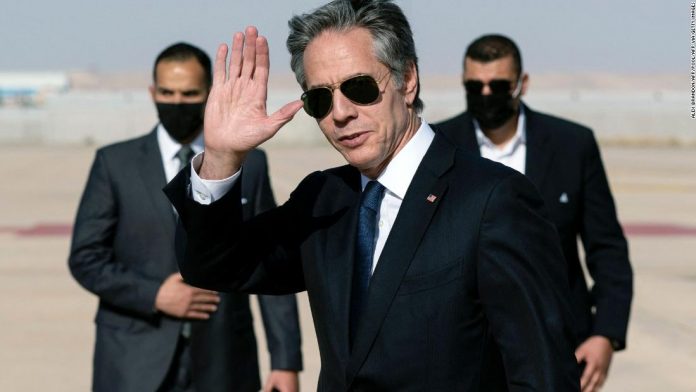 “We are committed to diplomacy, but this process cannot go on indefinitely,” Blinken said at a press conference in Kuwait.
Referring to the deal by its formal name, the Joint Comprehensive Plan of Action, the top US diplomat warned that time is running out to save the gains made by the 2015 agreement that offered Iran relief from sanctions and greater economic engagement in exchange for constraints on its nuclear program.
“At some point, the gains achieved by the JCPOA, cannot be fully recovered by a return to the JCPOA if Iran continues the activities that it’s undertaken with regard to its nuclear program activities, that, of course, are breaking … through the constraints imposed by the JCPOA,” Blinken said.
The Biden administration has been engaging in indirect talks with Iran in Vienna with the goal of returning to the nuclear deal that President Donald Trump pulled the US from in 2018 before going on to apply a slew of sanctions that made it impossible for Tehran to reap any of the economic benefits the deal promised. In response, after a year, Iran began violating the terms of the JCPOA.

But the indirect talks with Iran, which have been taking place in Vienna, seem to have stalled. The sixth round of those talks adjourned in June, just days after the election of a hardline cleric to be Iran’s new president. Neither side has announced when a new round will begin, but Iran’s supreme leader expressed his unhappiness with the talks on Wednesday.
Reuters reported that Ayatollah Khamenei told Iranian state television that Tehran would not accept Washington’s “stubborn” demands in talks to revive the nuclear deal and said that US officials failed to guarantee that Washington would never abandon the pact again.
“The Americans acted completely cowardly and maliciously,” Khamenei said, according to the Reuters report. “They once violated the nuclear deal at no cost by exiting it. Now they explicitly say that they cannot give guarantees that it would not happen again.”
Blinken said Thursday that the “ball is in Iran’s court.”
“So, we look to see what Iran is ready to do or not ready to do,” Blinken said. “We remain fully prepared to return to Vienna to continue negotiations, but as I said, this process cannot and will not go on indefinitely.”
Blinken said the US has engaged in “multiple conversations and negotiations in Vienna,” but not directly with Iran. “The Iranians have refused to talk directly, but with our European partners with Russia and China,” Blinken added.
“Iran that has decisions to make fundamental decisions to make about whether it too wants to return to compliance, and there is no amount of deflection that can change that, that basic fact, the ball remains in Iran’s court,” Blinken said. “We will see if they are prepared to make the decisions necessary to come back into compliance.”