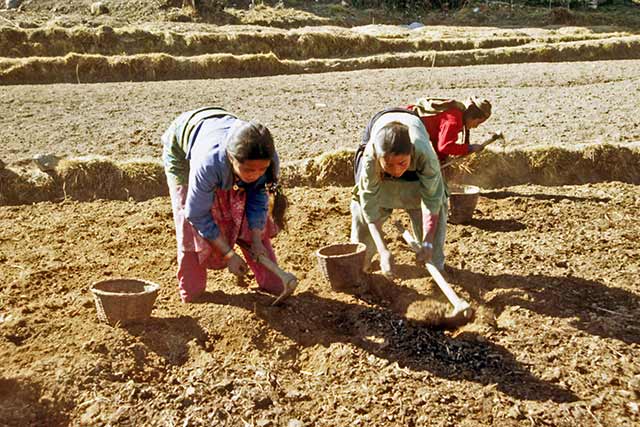 Some $20 million is urgently needed to support farmers in earthquake-hit Nepal resume agricultural activities and stave off the threat of prolonged food insecurity facing an estimated one million people, FAO warned today.

To date, only 13 percent has been received of the $23.4 million in emergency agricultural assistance which FAO estimates is required, as part of the revised UN Flash Appeal for Nepal.

Two separate earthquakes and a series of aftershocks struck in April and May killing more than 8,000 people and devastating large parts of the country. The disaster has also heavily disrupted agricultural activities, threatening the livelihoods of rural families.

An FAO-led Agricultural Livelihood Impact Appraisal found that in Nepal’s six hardest-hit districts, half of all farming households lost nearly all of their stored crops of rice, maize, wheat and millet. In addition, the earthquakes destroyed farming tools, kitchen gardens and supplies of fertilizer and caused significant damage to small-scale irrigation.

Some 16 percent of cattle and 36 percent of poultry were lost in the disaster with detrimental effects on rural household consumption and income. “Agriculture is a critical priority because two-thirds of Nepalis depend on farming for their livelihoods,” said FAO Representative in Nepal, Somsak Pipoppinyo.

Current levels of international assistance for Nepal’s earthquake-affected farmers will deliver “only a fraction” of the assistance urgently required, Somsak stressed. “We only have a limited window to act,” he added, noting how rice seeds have to be distributed urgently before the start of the heavy monsoon rains which are expect to arrive in the coming days.

Many earthquake survivors are still living under corrugated iron shelters, tarpaulins or even plastic tunnels normally used for growing vegetables and are vulnerable to mudslides. Many of their animals have no shelter.

The most urgent needs for the current cropping season are seeds and fertilizers, followed by irrigation, tools and technical support. The repair and functioning of irrigation systems will be critical for the winter cropping season, as well as barley and wheat seeds.

The Organization has already distributed 40,000 (5 kilogram) bags of rice seeds to the six most-affected districts of Dhading, Dolakha, Gorkha, Nuwakot, Rasuwa and Sindhupalchowk, in time for farmers to plant before the monsoon.

FAO is also looking at ways of increasing the resilience of Nepal’s most vulnerable farmers to future crises. In particular, in order to avoid as much as possible future losses of lives, properties and arable land due to landslides, options include planting deep-rooted trees and bushes, installing cages full of stones – known as gabions – to fix some highly unstable soil which has a high probability of sliding when filled with water with the coming monsoon.

FAO has received around $3 million for emergency relief so far, thanks to contributions from Belgium, Italy and Norway.