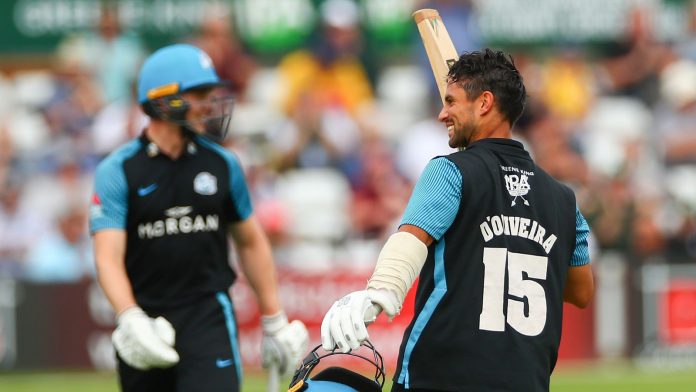 Haynes was flawless in his maiden professional ton of 153 while his opening partner’s 123 made him the third generation of D’Oliveira to reached three figures for Worcestershire in the format.

Their stand of 243, a best for the first wicket for the county, laid the foundations of a mammoth total of 338-7.

The Rapids maintained their 100 per cent record in the tournament while the Eagles lost for the first time.

Having been put in by Essex, D’Oliveira and Haynes excelled against a depleted home bowling line-up – with Sam Cook at The Hundred and Jamie Porter injuring his side during the victory over Middlesex.

D’Oliveira won the race to a half-century, smashing his 54th ball into the Tom Pearce Stand at wide long-on, before Haynes followed in 57 deliveries – for Haynes it was his third fifty in as many innings in the competition.

D’Oliveira also reached his hundred first, off 95 balls, but Haynes was quicker, in 91 balls, as both passed the milestone for the first time in professional white-ball cricket.

Jack Taylor performed heroics in the final over of Gloucestershire‘s clash against Durham at Scarborough to secure his side’s first win in this year’s Royal London One-Day Cup competition.

The visitors required 336 to beat Durham at North Marine Road after Graham Clark scored a brilliant 140 for the hosts.

Two fine innings from Ben Charlesworth (87) and James Bracey (90) had manoeuvred Gloucestershire into a decent position but it looked set to be in vain as late wickets appeared to have halted their charge.

However, Taylor took on the mantle and turned the game in the final over, dispatching Chris Rushworth for three straight boundaries – two sixes either side of a four – to deliver an unlikely four-wicket victory that gets them off the mark in Group A.

Warwickshire completed back-to-back wins with a pulsating seven-run victory over Leicestershire at Edgbaston.

Warwickshire were lifted over 300 by a maiden List A century from Matt Lamb, who went on to reach 119 not out from 105 balls. After Rob Yates’ stylish run-a-ball 72, Lamb and Ethan Brookes (63) added a Bears List A sixth-wicket record stand of 153.

Foxes openers Rishi Patel (118) and Harry Swindells (69) then gave their side the perfect start with a stand of 159 in 25 overs, but some careless shots, punished by careful catching, set in motion a costly collapse.