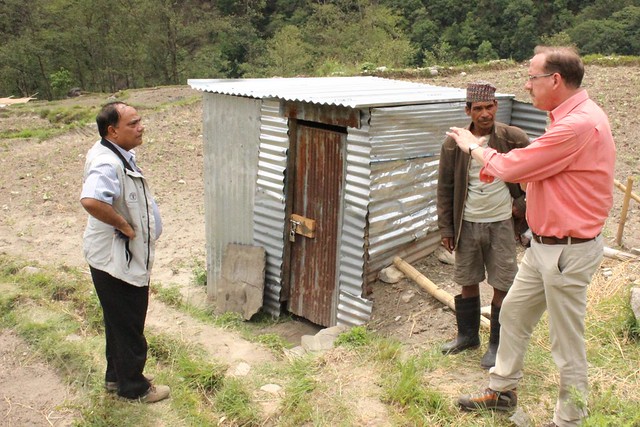 Since the earthquakes in Nepal, some farmers have noticed water disappearing into the ground, leaving just-watered terraces suddenly dry. Certain springs have dried up while others have suddenly filled with water. Irrigation channels have emptied, after earth walls collapsed. Landslides have swept away crops, roads and irrigation channels, and cost lives.

For farmers in the worst-affected districts, including Sindhupalchowk and Dolakha in the mountains near the Tibetan border, the earthquakes have already triggered a series of landscape changes which could have serious consequences for food production. Now it is feared the worst is yet to come, when the heavy monsoon rains arrive.

UN Food and Agriculture Organization (FAO) watershed management and mountains team leader, Thomas Hofer, visited Nepal to meet with farmers and see how their livelihoods have been affected. He is leading FAO’s work, in partnership with the Government, to help stabilize land and prevent landslides.

Senior agricultural development officer in Dolakha district, Babu Lal Chaudhary, said the earthquake had affected the land in many ways that communities did not yet understand. “After the monsoon arrives, there will be more landslides in the fields, roads will be blocked, and there will be food shortages,” he said. In Jalbire village, in Sindhupalchowk district, 43-year-old farmer Ram Bahadur Thapa said small landslides had already affected his land. Another Jalibire farmer, 50-year-old Chandra Bahadur said he was worried about food production because the earthquakes had destroyed all animal shelters in the village, and he now had cracks in his land.

Mr Hofer said FAO would look at ways to stabilize landslides already triggered by the earthquakes, and measures to prevent future landslides. “Some of the risk factors include unstable rocks, the steep gradient of the mountains, and continuing tremors,” he said. “We will look at agriculture, forestry and pastures together. Options include planting deep-rooted trees and bushes, installing cages full of stones to stabilize the soil, known as gabions, or building small, temporary ‘check’ dams to slow water flows.”

In addition, Mr Hofer convened the first joint meeting of the Nepal members of the Mountain Partnership—a UN voluntary alliance of partners dedicated to improving the lives of mountain peoples and protecting mountain environments—to discuss how they could join forces on the earthquake response.

Babu Lal Chaudhary, in Dolakha, said more work was needed to establish the impact on farmland, including changed water flows and landslide threats. “We haven’t seen the hardest time yet – that is still to come,” he said.