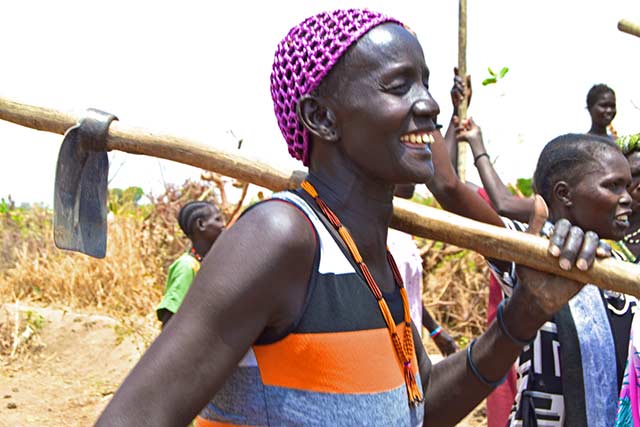 With his hands full of tomatoes, Atiang Lual Yel took a break from his farm work to meet with a team from FAO South Sudan and the Swiss Agency for Cooperation and Development (SDC). The SDC is a resource partner for the FAO-implemented project “Improved food security and livelihood development for agropastoral communities in Northern Bahr el-Ghazal and Warrap States.”

It was a scorching hot South Sudanese morning when Atiang met with the teams in March 2015. Atiang is a FAO Farmer Field School (FFS) alumnus in Northern Bahr el-Ghazal; he is a returnee to the state from Sudan, where he fled to in the 1990s.

FAO began developing FFS in South Sudan in 2006. Currently, through the SDC-funded project, FAO supports 25 FFS in Northern Bahr el Ghazal and 10 in Warrap State, with thousands of students. The FFS approach is a hands-on learning programme, where the classroom is the field.

During his studies, Atiang developed strong skills for vegetable production. He is now a successful farmer despite the many challenges, including having to leave his first farm before harvest owing to unclear land ownership and lease agreements. Yet his farming aspirations continue and he has become one of the most prominent local suppliers for the Aweil town market.

Transporters come to his farm every morning to collect bags full of fresh tomatoes, okra, eggplant, parsley, chilis and juice melon for the market in the dry season and crops including sorghum and maize in the rainy season. The markets in Northern Bahr el-Ghazal rely heavily on imported vegetables from Sudan, making Atiang a pioneer in town, to say the least. He also teaches and provides work opportunities on his farm to his community members. Even with an extended household of 12 people, his farming produces enough to feed the entire family and enables him to save and make investments in his future. On average, Atiang buys three cows a year from his profits. His farm operates year-round and FAO South Sudan provided a water pump to boost production for his dry season vegetables.

A former brick-maker by profession, Atiang says, “I make a better income farming and it helps me to feed my family.”  He pays for school fees for his children, and has built three “tukuls” that provide shelter and homes for members of his community. As he may have to leave his currently rented farm land, he has been building a home on a nearby farm where he can hopefully live for the long term future with his family.

But perhaps the biggest investment Atiang saved up for was one that saved his life. Atiang became very sick over the past year, and he used his savings to travel to Khartoum to seek medical treatment.

On that hot morning in March 2015, Atiang’s neighbour and close friend expressed with great sentiment to the visiting teams, “If he did not have the farming skills, he would not have been able to afford his surgery. And he would not be with us here today.”  It was clear to see how much Atiang meant to his community and how much farming meant to him.