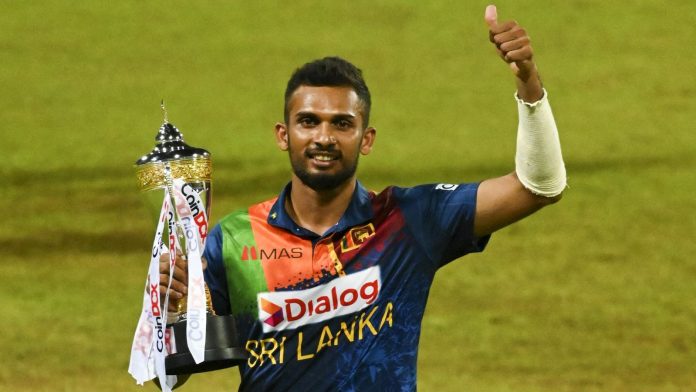 Spinner Wanindu Hasaranga celebrated his birthday by taking four wickets as Sri Lanka beat India by seven wickets and took the three-match Twenty20 series 2-1 in Colombo on Thursday, securing their first series win in the format since 2019.

Hasaranga (14 not out) and Dhananjaya de Silva (23 not out) chased a meagre total of 82 with 33 balls to spare after Rahul Chahar dismissed the opening pair of Avishka Fernando (12) and Minod Bhanuka (18).

“The wicket was slow and our spinners bowled really well,” said Hasaranga, who finished with career-best T20 figures of 4-9 on his 24th birthday.

Skipper Shikhar Dhawan fell for a golden duck in the opening over before Hasaranga took out Sanju Samson (0) and Ruturaj Gaikwad (14) in quick succession, with India’s top-order collapse leaving them at 36-5 after nine overs.

Bhuvneshwar Kumar (16) and Kuldeep Yadav (23 not out) contributed to nearly half of India’s total as they were restricted to 81-8, registering their third-lowest total in T20 internationals.

India won the first match by 38 runs on Monday before Sri Lanka levelled the series on Wednesday with a four-wicket win in a low-scoring thriller.

India named a second-string side for their tour of Sri Lanka as several first-choice players are in England preparing for a five-Test series starting on Aug. 4 in Nottingham.

Their already depleted squad was stretched even further on Tuesday after Krunal Pandya’s positive COVID-19 test resulted in eight players being unavailable for selection for the second game, which was pushed back by a day.

“It was a difficult situation for us but as a team, we decided we will stay and play the series,” Dhawan said. “Last game was a close one, today it was an off day for the batting unit but the boys will learn from it.”