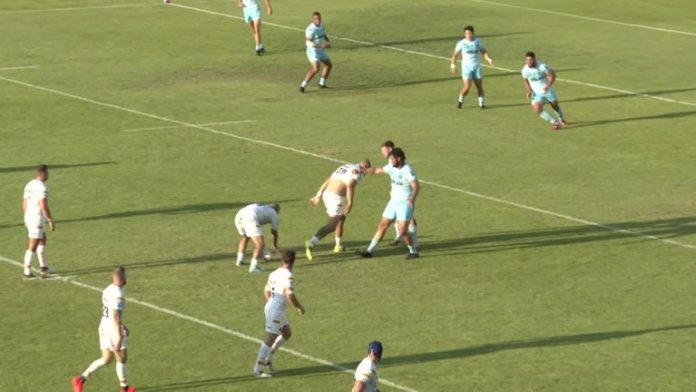 James Maloney returned from suspension to help Catalans Dragons maintain their dominance at the top of Super League with a 40-20 victory over Wakefield Trinity at a sun-drenched Stade Gilbert Brutus.

Wakefield did not wilt in the 32-degree heat and humidity in Perpignan and kept the pressure on their hosts throughout the game, but Catalans were too strong.

Sam Tomkins was first to stride over for a try after five minutes as Catalans stretched the Wakefield defence to the left.

But Wakefield hit back when loose forward Yusuf Aydin broke through between the posts to score, with scrum-half Mason Lino levelling the scores at 6-6 with a simple conversion.

Trinity were penalised in front of their posts after 15 minutes and Maloney put the Dragons back in front with a straightforward kick to goal but giant prop David Fifita took Wakefield forward with a string of powerful bursts and Catalans were forced to drop-out from in-goal twice in succession.

Then Fifita smashed through the home defence and shrugged off Tomkins to plant the ball over the line in the 20th minute. Lino again added the conversion to give Trinity a four-point lead.

However, that advantage did not last long as Catalans hooker Alrix Da Costa helped put his side back in front with a two-metre burst from dummy-half, before the Dragons unleashed their own giant prop, Sam Kasiano, from the bench and two powerful charges saw him cross the line on the half-hour and the French side were eight points ahead at the interval.

Trinity struck back straight after the break with a Lino penalty but the heat was getting to Wakefield as Catalans substitute Arthur Mourgue forced them into a goal-line drop-out before Maloney struck a penalty to restore the eight-point difference.

Mourgue was the tormentor again, forcing a second drop-out from Trinity with a clever chip-chase, and Mickael Goudemand and Matt Whitley went close before prop Gil Dudson broke the Wakefield line with a 10-metre drive. Another successful Maloney conversion made it 28-14 with 15 minutes to go.

But Wakefield were not done and Fifita claimed his second try with a trademark barge between the posts and Lino’s conversion put the visitors back in contention at 28-20.

They would not get any closer though, as Samisoni Langi floated a peach of a pass to winger Fouad Yaha for try in the 72nd minute and Maloney’s seventh conversion from wide out on the left made it 34-20.

Tom Davies thought he had added another try for Catalans but was pulled back by referee Marcus Griffiths for a forward pass. Davies was not to be denied in the end, however, and after switching wings to link up with Yaha he crossed for the final try of the game as the hooter blew.

Maloney’s toughest kick of the night from the left touchline went sailing through the sticks to wrap up yet another victory for the league leaders.