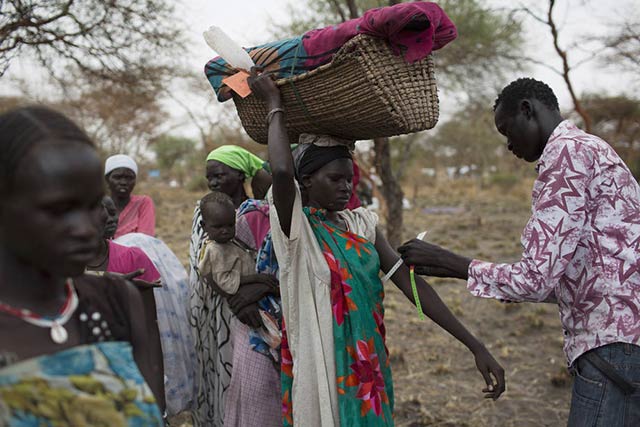 The ongoing conflict and related economic downturn in South Sudan has left 3.8 million people facing emergency and crisis levels of food insecurity, according to a new Integrated Food Security Phase Classification (IPC) report. That is 1.3 million more than the IPC’s last projection made in December 2014.

It warned that unless action is taken, the situation is set to further deteriorate with around 4.6 million people, or some 40 percent of the country’s population becoming severely food insecure by July 2015.

The IPC estimates for April, indicate that most of the people affected – 3 million at Crisis level and 800 000 at the Emergency level – are located in the three states of the country’s northeastern Greater Upper Nile region hardest hit by the fighting. Many others are from the western part of the Greater Bahr el Ghazal region where conditions have deteriorated as a result of a spillover from the conflict.

The conflict and insecurity disrupted last year’s planting season in the Greater Upper Nile region and has led to the displacement of millions of livestock as herders fled from the fighting across the country. As conflict escalates, more people are being displaced above the 1.5 million already recorded in 2014. Meanwhile, even in non-conflict affected areas many markets are not functioning properly while rising inflation and depreciation of the local currency are driving food prices upwards.

The report also shows that in addition to the 3.8 million people now at Emergency and Crisis levels, an additional 4 million have reached the Stressed food security phase (see graphic at right). “This means they will not be able to adequately sustain their livelihoods or meet their food needs without engaging in negative coping mechanisms including consuming wild foods and skipping meals,” said Erminio Sacco, Chief Technical Adviser of the Agriculture Food Information System in South Sudan – an FAO project funded by the European Union to support the institutionalization of robust food security information systems at both the national and state levels.

“Observed trends, such as market disruption with increasing food prices, will inevitably lead this population to spiral into acute levels of food insecurity across the country,” he added. The IPC is a multi-partner initiative that uses a standardized approach to classifying food insecurity, particularly in crises situations. Estimates are based on a technical consensus among the involved stakeholders, including governments.

Already, in South Sudan’s capital and largest city, Juba, prices of both locally produced and imported cereals, vegetable oil and sugar increased by 24 to 69 percent in the first quarter of the year and are currently 90 to 100 percent above the normal seasonal levels.

Food typically comprises a large share of household expenditure here – up to 85 percent for the urban poor. As the economic downturn erodes incomes, more urban and rural poor will be unable to meet their food requirements.

The IPC report noted how the conflict has threatened rural livelihoods, particularly in the Greater Upper Nile region, further eroding the food security situation. For example, it noted a significant decrease in the amount of households that receive income from casual – skilled and unskilled – labour, declining from typically 20 to 30 percent to merely 6 to 8 percent.

In order to make a living or meet their food needs, many people in rural areas are now engaged in alternative livelihoods options such as sale of crops, livestock and natural resources such as wooden poles, grass, firewood, charcoal, or are seeking food assistance through kinship ties.

The IPC report noted that improving the food security situation will greatly depend on security, conflict resolution, economic stabilization and unrestrained humanitarian access.

As part of its country resilience programme, FAO has scaled up efforts to reach 2.8 million people with emergency livelihood support including crop kits, vegetable kits, fishing kits and livestock treatment kits in 2015. But the Organization warns that the South Sudanese people’s ability to recover will remain fragile until people can fully resume rebuilding their livelihoods.

“FAO South Sudan is adapting its operations and prioritizing emergency livelihood interventions to reach people who are severely food insecure, but the main concern is safety and accessing these people in time,” said FAO Representative Serge Tissot.

“To avoid a further and potentially catastrophic decline in the food security situation of the most vulnerable, it is critical that partners continue and possibly expand their work on emergency livelihood support as well as on building resilience,” Tissot added.

The latest IPC report endorsed by the Government of the Republic of South Sudan can be found here. The next comprehensive IPC analysis for South Sudan will be completed in September 2015.