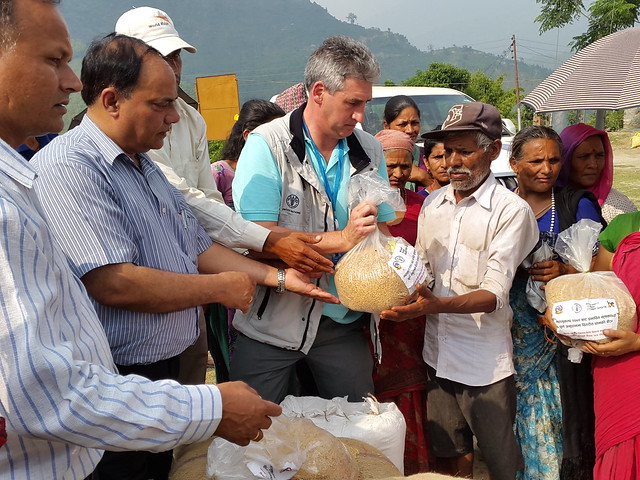 Just over five weeks since Nepal’s devastating earthquake of 25 April, the Food and Agriculture Organization of the United Nations expects to complete its emergency distribution of rice seeds to farmers in the six most affected districts in time for the imminent planting season. As rice seeds were being distributed in Jaubari village development committee (VDC) in Gorkha district (140 km west of Kathmandu) on 29 May, local authorities noted that FAO was one of the first organizations to deliver rice seeds to the district. Following FAO’s emergency seed distribution activities, a total of 198 tonnes of rice seed will have been distributed across the six districts. Once harvested, it is expected that the seeds will provide food for an average household for five months. The seeds were purchased from the National Seed Company, with funding from Belgium, Italy and FAO.

Distribution of rice seeds was prioritized to allow farmers time to plant prior to the onset of the monsoon. Animal feed and airtight grain storage bags to store harvested crops are now being distributed to the same six districts. Composite packets of vegetable seeds, including beans, cowpea, cauliflower, carrot, tomato and pumpkin, will soon follow.

In Jaubari VDC, around 100 farmers registered to receive rice seeds on the day of distribution. The village had been chosen based on the advice of the District Agriculture Development Office (DADO) and District Disaster Relief Committee (DDRC), while the distribution of inputs amongst the most-affected farmers was ultimately determined by the local citizen committee. Priority was given to those rice farmers who had lost seed or whose livelihood assets had been damaged as a result of the earthquakes.

Among those waiting to receive rice seeds in Jaubari VDC was rice farmer Sita Sunar, who has run her family’s farm and cared for her four children and her parents-in-law for the last two years while her husband has been working in Dubai. More than a month after the first major quake, Sita’s family was still sheltering under a tarpaulin. Sita was able to salvage some grains for family consumption, but she lost nearly six months’ supply, which had been stored in her home. “Life here will be very difficult once the monsoon arrives,” she said. “We have no money to repair our home or to buy seeds to plant more crops.”

The FAO Country Programme Officer from the Regional Office for Asia and the Pacific, Andrew Sobey, and the Assistant FAO Representative in Nepal, Binod Saha, assisted with distribution in Jaubari VDC. They said the rapid mobilization was planned and delivered in agreement with the Ministry of Agricultural Development, the DADO, the DDRC and the local community. “It was important that the local community was directly involved in identifying the most affected households within the VDC, and we will follow a similar process when we distribute other agricultural inputs, including vegetable and millet seeds, in the coming weeks,” they said.

These initial efforts, led by FAO in partnership with the Government of Nepal, will improve food security of 184,000 people affected by the earthquake.