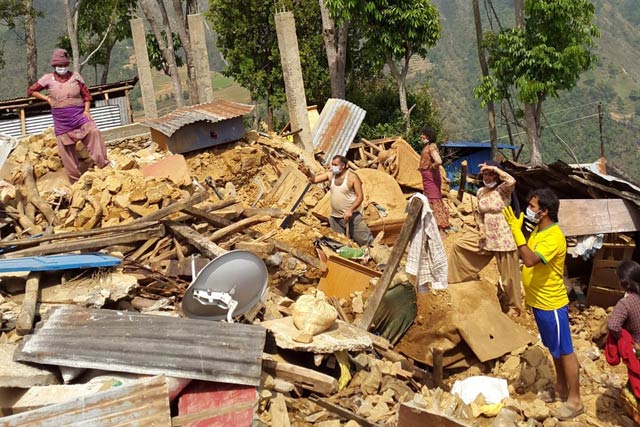 Half of all farming households in key rural districts lost nearly all of their stored crops of rice, maize, wheat and millet in the recent Nepal earthquakes, according to a report released by the Nepal Food Security Cluster.

The earthquakes also resulted in the deaths of one in five cattle and more than one in three poultry in these districts, in mountain areas. Growing shortages of crop seeds, eggs, milk, meat and vegetables are putting families at greater risk of food insecurity, including inadequate nutrition, in the coming months, the report found.

The ‘Agricultural Livelihood Impact Appraisal’ was led by the UN Food and Agriculture Organization (FAO), as part of the Nepal Food Security Cluster assessment effort. The report gives the clearest picture so far of the impact of the earthquakes on Nepal’s critical agriculture sector, in the six most-affected districts of Dhading, Dolokha, Gorkha, Nuwakot, Rasuwa and Sindhupalchowk.

The earthquakes struck at the worst possible time for farmers. They were about to plant the staple crop of rice, which must be in the ground before the monsoon arrives in a few weeks’ time. Many farmers were also harvesting wheat or planting maize for the summer.

The report found almost all households were storing rice and maize from previous years, and half had lost nearly all their stored crops and seed beneath collapsed buildings. Most households said they could no longer source seeds on the market, which may lead to shortages of harvested crops during the summer and winter seasons.

According to estimates, the earthquakes also killed more than 180,000 large animals, 38,000 sheep and goats and more than one million poultry in the six districts. Thousands more animals were injured. Surviving animals are less productive due to stress, including a lack of shelter and feed. More than half of people surveyed said they were no longer eating meat and eggs and many were no longer drinking milk.

The earthquake also destroyed farming tools, kitchen gardens and supplies of fertilizer, and caused significant damage to small-scale irrigation. A senior technical officer with the FAO emergency and rehabilitation division, Neil Marsland, said the earthquakes were a “rural disaster”.

“Agriculture will be the backbone of Nepal’s recovery, and we must continue our urgent work helping farmers replant crops, care for planted crops and remaining livestock, and rebuild their livelihoods,” Mr Marsland said. “Without timely assistance, many farmers could be forced off their land – creating a second wave of displaced people.”

In order to plant and harvest crops, farmers most urgently need seeds, followed by fertilizers and repairs to irrigation systems. To protect remaining livestock, farmers need animal shelter, feed, medicine and vaccinations, and water sources. Two-thirds of Nepalis rely on agriculture for their livelihoods.

FAO has already completed an emergency distribution of 40,000 bags (5kg) of rice seed, in time for planting before the monsoon. It has also distributed 20,000 airtight grain storage bags, with 20,000 more to follow, and nearly 20,000 bags (25kg) of animal feed, and has now begun distributing 50,000 packets of mixed vegetable seeds.

In the next few months, FAO will distribute more of these farming inputs, as well as wheat seed and mineral blocks for surviving livestock. An FAO assessment of forest damage in the six most-affected districts, using high-resolution satellite imagery, found up to 118km of forest may have been damaged.

Thomas Hofer, FAO watershed management and mountains team leader, said looking at agriculture, forestry and pastures in an integrated way could help prevent landslides and support stabilization measures, such as tree planting, in the immediate and medium term.

As part of the revised UN Flash Appeal, FAO now estimates that $23.4 million are required immediately for emergency assistance to help around one million people in 220,000 affected farm households. The majority are women and children.