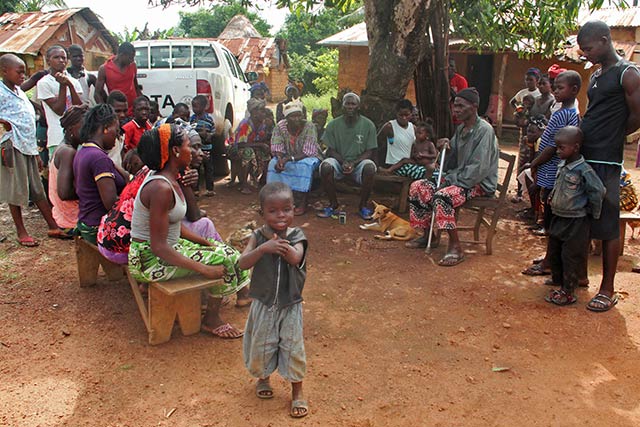 Robust social mobilization activities including sensitization has largely contributed to the increase in the survival rate. In August 2014, 127 agriculture extension agents across Sierra Leone were trained on social communication to engage the farming communities in thirteen districts with preventive and behavior change messages on Ebola control through community meetings, sensitizations and radio discussions. This was made possible thanks to joint collaboration between the Ministry of Health and Sanitation, FAO and UNICEF.

Last 24 May 2015 marked one year since the first case of the Ebola virus disease was reported in the country. FAO toured three districts in the South, East and Northern Provinces to assess the impact of the social mobilization activities.

The residents in the rural communities acknowledged that the Ebola preventive and control messages by agriculture extension staff greatly helped them to gain awareness and stop the spread of the virus. In Kailahun District, Falla Jusu, the Chief of Kissi Teng Chiefdom told the FAO team that most people who were suspected of being infected with the virus in his chiefdom ran into bushes.

Some of them even revolted against health workers who were taking suspected and confirmed cases to treatment centers. He stated that stiff resistances due to rumours and fear were observed in his chiefdom even when bye-laws were instituted. “Our collaboration with the agriculture extension officers to reach out to the communities with prevention messages helped to calm the tensions”, he explained.

Mohamed S. Bah, Field Crisis Manager of the Ebola Response Committee in Tonkolili District, stressed that the agriculture extension staff has played a key role in reaching out to farmers living in remote areas, especially in hard-to-reach suburbs. He explained that his team always meets with the extension officers whenever they want to target farmers in the district.

In an outdoor meeting held in Kpondu Village, where the first Ebola disease case was reported in Sierra Leone, Thomas Fayia, the Deputy Headman of the village told the FAO team that the messages communicated by the social agents during frequent visits helped them to gain a quicker understanding about the disease. Out of a population of over 450, twenty-two people contacted the virus and only seventeen died.

Agriculture extension officers have not only prompted farmers to adopt Ebola preventive measures, but are also encouraging them to return to their field and resume farming. The Kailahun District team for instance is on a campaign that encourages every farmer to plant at least an acre of Inland Valley Swamp, which they are sure that the yield will feed a family of six for a considerable period or until second cropping.