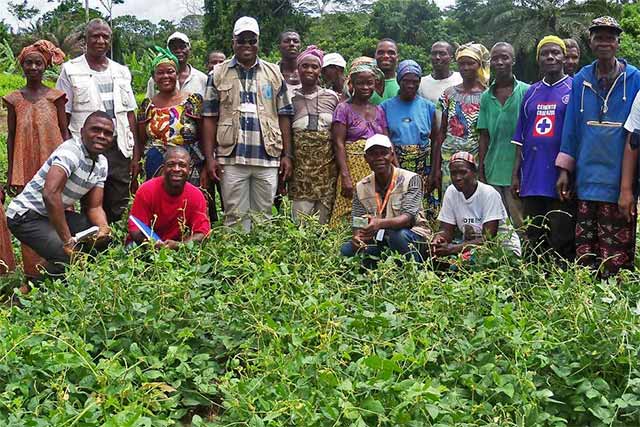 On a three day official field visit to Grand Gedeh and Maryland Counties in early May, FAO Representative in Liberia, Marc Abdala, said FAO-supported projects were aimed at increasing food security, poverty reduction and the introduction of new farming approaches for rural dwellers.

He thus urged beneficiaries to take full advantage of opportunities provided under every project and then take total ownership so that when FAO and partners exit, the community and its people would continue to reap the benefits.

Speaking in Tian and Pouh Towns, Grand Gedeh County and in Kolouso, Dorrobo-Gbalaken (Freetown) and Pleebo communities in Maryland County, Mr. Abdala said: “We have come to see the good work you are doing. FAO farmer field school project is intended to teach you methods that you can take home to your own farms. Above all else you must take ownership of these activities so that it remains and serves the communities when FAO and its partners complete their mission and leave your community for other areas.”

He then emphasized the need for Liberian youth to get more involved in agriculture and for farmers to work together in groups for increased production, knowledge-sharing and team building. “As farmers, you have started small like this in your community. Remain in your groups and work together men and women with the youth who will take over from older folks. There is a probability that you will expand and grow bigger to sell produce to other parts of Liberia and even beyond.”

For his part, FAO’s Assistant Representative for Programme, Joseph Boiwu, urged the beneficiaries to start looking at possibilities of standing on their own as farmers without always looking around for help from UN and NGOs. “By now you should not be talking about seed rice because FAO supported you in these same communities in the past. You have to learn to reserve seeds for the next planting season. The idea of always wanting more and asking for more is not sustainable.”

John Kpah, an Ivorian refugee beneficiary on the Tian site under the GEF (Global Environment Fund) project, said he saw the project and the Farmer Field School as a classroom setting for learning new farming methods. “This place is a learning ground for new ideas. When we get the concept we will be able to do the same thing on our farms and grow more crops.”

Annie Freeman said the climate change adaptation project was like nothing she had before experienced: “I am learning agriculture the improved way. For example, the cowpeas we planted on unfertile grounds will help make the land rich so that okra and other crops that would not grow there can be cultivated. This is a new idea for me. From now on, anytime I work on unfertile soil, I will plant cowpeas to make the soil better.”

This is the second such trip for FAO Representative Marc Abdala. In December 2014, he visited project sites in Bong and Lofa Counties to abreast himself with prevailing achievements, activities and constraints and to meet with beneficiaries, project staff and local government officials.

In Liberia in recent years, rainfall patterns became erratic and irregular with prolong sunshine even in the rainy season. Farmers became confused and unable to properly plan for the cultivation of crops as the rains fell during the period of dry season and sunshine was common during the rainy season. The Government of Liberia (GoL), through the Ministry of Agriculture (MOA) and the United Nations Development Programme (UNDP), signed the Global Environment Facility (GEF) Agreement in 2011 to implement a project under the Least Developed Countries Fund (LDCF) entitled: “Enhancing Resilience to Climate Change by Mainstreaming Adaptation Concerns into Agriculture Development in Liberia”.

The goal of the project is to promote climate-resilience agriculture development in Liberia with the objective of increasing resilience of poor agriculturally dependent communities and decreasing their vulnerabilities to climate change in the agricultural sector in Liberia. The climate is being implemented in Bong and Grand Gedeh Counties as a pilot effort so that results can be replicated to other farmers.