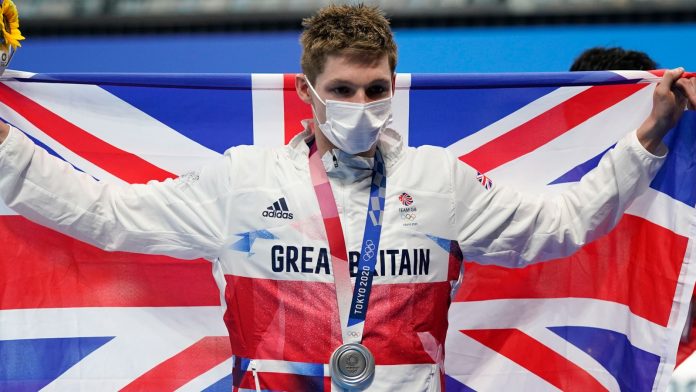 Duncan Scott’s silver comes after a gold in the 4x200m freestyle relay and a silver in the 200m individual discipline earlier in the Games; Greenbank wins the bronze to make it six swimming medals for Great Britain so far at Tokyo 2020

Scott, who had already won gold in the men’s 4x200m freestyle relay and silver in the individual discipline this week, was fifth heading into the final 50m but he upped the ante to surge up the leaderboard.

However, despite clocking a personal best time of one minute and 55.28 seconds, the Scot finished an agonising 0.28secs off top spot as he was denied his first individual Olympic gold by China’s Wang Shun, with Jeremy Desplanches collecting bronze.

Scott’s third podium place took Great Britain to six swimming medals for these Games – moving them just one behind their all-time record at London 1908 – after Greenbank had earlier added to the tally.

Greenbank qualified second fastest to reach the final on Friday morning and started well at the Tokyo Aquatics Centre, sitting behind only Evgeny Rylov of the Russian Olympic Committee after the first length.

He was overtaken by Ryan Murphy of the United States by halfway but comfortably held on to finish third in a time of one minute and 54.72 seconds.

Hat-trick 🥈🥇🥈@Dunks_Scott claims a sensational silver in the 200m individual medley with a lifetime best.#TeamGB pic.twitter.com/r2TpAPsCWQ

Rylov set an Olympic record time of 1min 53.27 secs to claim his second gold of these Games, having already bagged top spot on the podium in the men’s 100m breaststroke, while Murphy finished in 1:54.15 to scoop silver.

Greenbank said: “It’s amazing. A dream come true. I’m so happy and over the moon.

“My first memory of swimming is watching the Beijing Olympics. It’s always been a life ambition of mine so to come away with a medal, an individual medal as well, is absolutely amazing.”