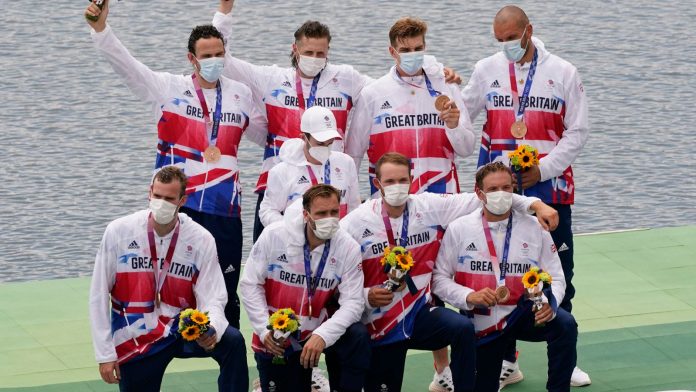 A bronze medal for the men’s eight team secures British Rowing’s second medal of the Games following a silver in the men’s quadruple sculls on Wednesday; GB have failed to win a gold medal at the Games for the first time since 1984

They were not considered to be realistic medal challengers, but it proved an outstanding display by Josh Bugajski, Jacob Dawson, Tom George, Mohamed Sbihi, Charles Elwes, Oliver Wynne-Griffith, James Rudkin and Tom Ford.

It was Britain’s second medal of the Tokyo Olympics rowing regatta after a silver in the men’s quadruple sculls on Wednesday.

The bronze medal ensured a positive end to a difficult Games for British Rowing.

Earlier on Friday, Vicky Thornley agonisingly missed out on a medal in the women’s single sculls.

The 33-year-old Welsh rower was pipped to bronze by Austria’s Magdalena Lobnig after a strong second half of the race, but she had to settle for fourth, just 67 hundredths of a second off the podium.

Thornley had been bidding for a second Olympic medal after winning double sculls silver alongside Dame Katherine Grainger in Rio five years ago.

Thornley said: “Fourth is tough, but I don’t think I could have done any more, especially in the second half of the race.

“I didn’t have quite enough at the end, but I am proud of what I have delivered over the last eight days. There have been some hellish days, especially the three days waiting for the semi-final.

“The last five years have been incredible – some of my darkest days and some of my best days. I am proud of the race I put together.

“I thought I had the momentum, but I didn’t have quite enough.”