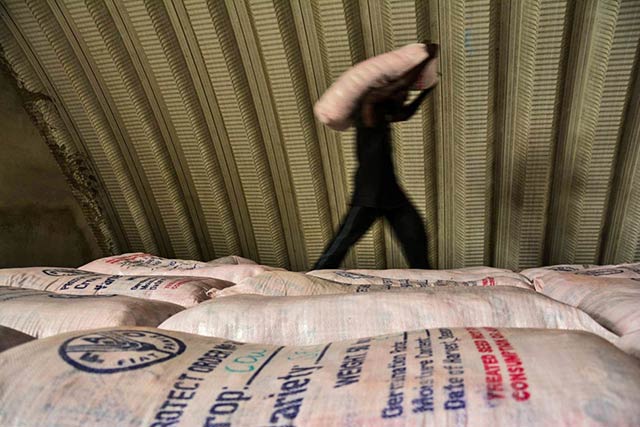 As the main planting season here begins, the UN’s Food and Agriculture Organization (FAO) is accelerating its efforts to get vital seeds, tools and other materials to some of South Sudan‘s most vulnerable farmers.

With up to 18 flights loaded with seeds, tools and fishing kits leaving Juba each day, FAO is working to get these materials into farmers’ hands in time for planting in conflict-hit areas of Upper Nile and Jonglei states, where hunger and malnutrition levels are particularly high. The airlifts are complementing land transportation in areas no longer reachable by truck.

In the last few days, almost 100 tonnes of inputs have been flown from Juba to local airstrips, representing just a portion of those destined to reach over 175,000 food-insecure farming families in Upper Nile, Unity and Jonglei by the end of May.

“For many farmers, this is the only opportunity to plant cereals this year”, said Serge Tissot, acting FAO Representative in South Sudan. “Without seeds now, they will have to wait another year to plant and that means they won’t see another cereal harvest until the end of 2016”.

So far, just one flight was able to land in Unity state before the conflict forced partners and UN agencies to suspend activities. FAO is monitoring the situation and adapting its programme to rapidly meet the needs of thousands of vulnerable people, taking any opportunity to provide inputs in more secure areas.

The current wave of fighting comes at a crucial time for farmers who have depleted their food stocks and have only the next few weeks to plant their crops.

“We have a small window to provide farmers with the inputs they need to start planting”, added Karim Bah, FAO’s Emergency Response Manager in South Sudan. “Given the massive quantities that have to be moved in a very short time, renewed insecurity in some areas and the start of rains, we have had to use the fastest means of transport – where trucks are no longer a viable option, airlifts have been the most appropriate alternative”.

FAO is collaborating with national and international NGOs based in the target regions to distribute the airlifted materials on the ground.

The airlifts are just one part of FAO’s wider efforts to provide conflict-affected and food-insecure families in South Sudan with a means to produce their own food and build more resilient livelihoods.

All told, FAO is aiming to support 2.8 million people throughout South Sudan in 2015 by providing a combination of vegetable, crop and fishing kits, as well as other kinds of support.

With planting underway, crop kits are being prioritized. Each containing at least three cereal seeds (sorghum, cowpea, maize, groundnut and sesame) and a hoe, the kits are sufficient to plant 1.3 hectares per family. Recipient households can be expected to harvest 1 360 kg of cereals in September/October, enough to feed their families for five months.

FAO has also been carrying out widespread livestock vaccination campaigns during the dry season, targeting animals based in the cattle camps before they start migrating as the rains begin.

“So far, we have reached 2 million animals in 2015, protecting the main social and economic asset of hundreds of thousands of South Sudanese agropastoralists, as well as safeguarding public health from the spread of animal diseases,” said Tissot.

As part of FAO’s efforts to control livestock disease outbreaks, the Organization has facilitated a meeting between the veterinary authorities of Uganda and South Sudan to discuss cooperation for the control and prevention of transboundary animal diseases.

Agriculture has huge potential to drive growth and prosperity in South Sudan, even when violence limits production and disrupts other economic activities. As food security deteriorates in many parts of the country, FAO is increasing its efforts to support the people of South Sudan in producing the food that is so crucially needed by their families and communities.