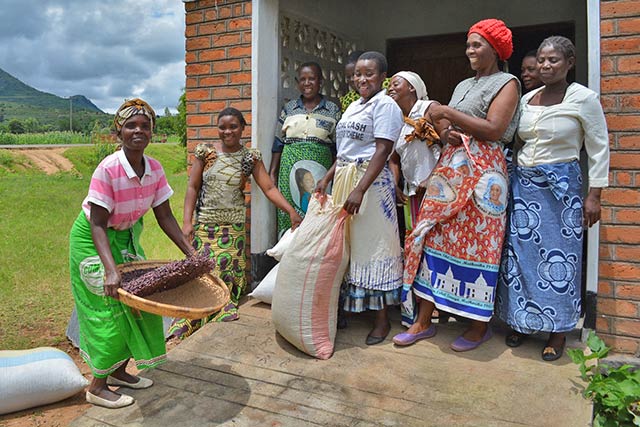 In rural Phalombe district, Julita Bonongwe, 49, sits in front of a warehouse stocked with foodstuffs. She is one of more than 1.1 million people affected by flooding in southern Malawi earlier this year, which submerged or washed away more than 64 000 ha of cropland.

The devastation caused hundreds of millions of dollars in damage to property and livelihoods, as well as ignited fears of food insecurity in the 15 flood-affected districts. The Minister of Agriculture, Irrigation and Water Development (MAIWD) estimated that the Government would need USD 16 million for disaster recovery in the agriculture sector alone in order to assist affected smallholder farmers.

In a good year, Bonongwe would typically harvest 20 bags of maize from her land. After the floods, the single mother had to find a way to feed her four children. She said, however, “When a catastrophe like this has hit you, what is required is to be strong and figure out how you can survive”.

Along with fourteen other women, Bonongwe is a member of the Nalingula Producers and Marketing Cooperative, which operates in Naminjiwa Extension Planning Area, Phalombe. She now grows maize, pigeon pea, rice and sweet potato and uses the profit gained through the cooperative to feed her family.

Yields from Bonongwe’s cooperative are used to supply high quality food for use in school feeding programmes in Mangochi and Phalombe. The cooperative is a beneficiary of the joint initiative Purchase from Africans for Africa (PAA Africa), implemented by the Government of Malawi with technical leadership and expertise from the Food and Agriculture Organization of the United Nations (FAO) and the World Food Programme. Financial support is provided by the Government of Brazil and the United Kingdom’s Department for International Development.

An example of South-South cooperation, PAA Africa was inspired by Brazil’s achievements in combatting hunger and poverty. The initiative is being implemented by the Governments of Ethiopia, Malawi, Mozambique, the Niger and Senegal and is now in its third year.

The regional initiative focuses on how governments can procure locally-grown food for public institutions, such as schools, directly from small-scale farmers. In close collaboration with MAIWD, FAO’s role in the project is to assist farmers with inputs and training on modern agricultural practices and post-harvest handling practices.

PAA Africa can greatly improve local production, nutrition and livelihoods. As a result, Bonongwe feels hopeful: “My future looks bright because I am not alone. If I did not belong to a cooperative, I would have had untold problems, been unable to survive and become dependent on food aid.”