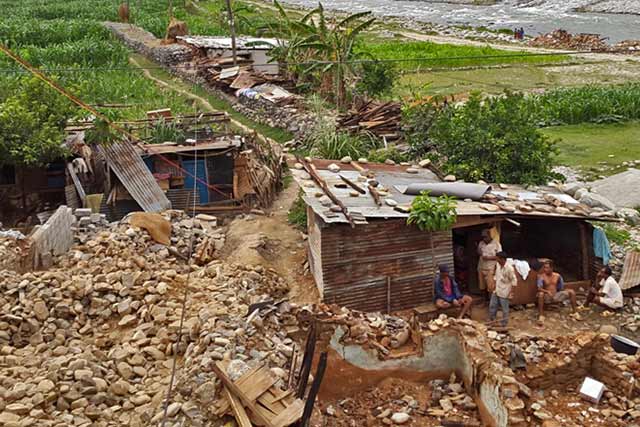 H.E. Mr. Vutti Vuttisant, Ambassador of Thailand to Nepal travelled by road on 15 May 2015 to visit Sindhupalchok district to take stock of the situation after the devastating 7.8 magnitude earthquake that shook Nepal on 25 April 2015. Ambassador Vuttisant was accompanied by Dr. Somsak Pipoppinyo, Food and Agriculture Organization Representative to Nepal and FAO staff from Rome, Italy who are assisting with the response.

Sindhupalchok is one of the worst earthquake affected districts. While the epicentre of the earthquake was in Gorkha district, the 6.7 magnitude aftershock took place in Sindupolchok district 17km south of Kadari, killing and injuring thousands. Many VDCs have still not been reached due to their remoteness and inaccessibility both in terms of roads and telecommunications. According to district authorities 63,885 houses are severely damaged and at least 109,000 people are affected, 40% of district population. This number may increase. Around 90,000 people are in need of urgent assistance.

Damage in the Agricultural sector

According to the District Agricultural Development Officer, farmers in the district have lost at least 600 metric tons of rice and 4500 metric tons of wheat harvested just a few days before the earthquake. When their homes were reduced to rubble, the local people also lost their grain stores which were kept in the houses. In addition to grain stocks, there were losses of greenhouses, beehives and mushroom cultivation facilities. Important agriculture implements such as power tillers, water storage cans, tractors and other tools were lost.

Losses in livestock, an important source of food products and income, is also significant with more than 4500 cows and buffaloes killed. Carcass disposal is still underway. Many surviving livestock are injured, some are untethered, feeding on standing crops and are without shelter from rain or cool night time temperatures. Tens of thousands of shelters including for goat, pig and poultry are damaged or destroyed. Livestock feed and medicines are out of stock in the district. Fish ponds for rainbow trout will need to be restored the district officers pointed out.

Many Service Centre’s were destroyed. These served as central points for contact with farmers and distribution of inputs. Personal identification papers of some farmers are missing, further complicating their receipt of benefits. The District officers reported most farmers are yet to return to their fields and that the earthquake of 12 May further delayed them.

Dr Somsak, FAOR, underlined the need for the international community to work intensively with communities and the government to restore agricultural and rural livelihood activities in the earthquake affected districts.