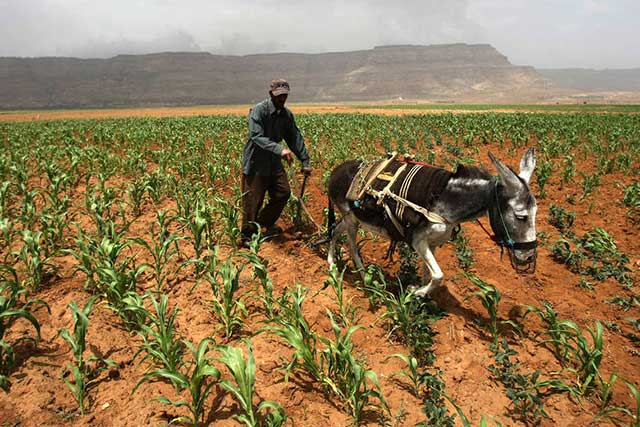 Amidst escalating conflict at a crucial time in the country’s cropping season, almost 11 million people in Yemen are severely food insecure and millions more are at risk of not meeting their basic food needs, FAO said today.

According to the Organization’s latest assessment, increasing conflict in nearly all major towns across the country is disrupting markets and trade, driving up local food prices and hampering agricultural production, including land preparation and planting for the 2015 maize and sorghum harvests.

Around 850,000 children are acutely malnourished. More than half of Yemen’s population – some 16 million out of a total of 26 million— is in need of some form of humanitarian aid and has no access to safe water.

The latest escalation of conflicts is expected to further increase food insecurity in the poverty-stricken country. Paradoxically, some 2.5 million food producers, including farmers, pastoralists, fishermen and agricultural wage labourers, are among those identified as food insecure.

“We are entering a crucial period for crop production in Yemen and now, more than ever, agriculture cannot be an afterthought if we want to prevent more people from becoming food insecure amidst this crisis,” said FAO Representative for Yemen, Salah Hajj Hassan. Governorates in the far Northwest and South are most severely affected by food insecurity.

In some areas, like the western port city of Hodeidah, food prices have doubled and fuel prices have quadrupled. Further increases are expected as a result of fuel shortages and the impact of civil unrest on imports and transportation networks across Yemen. While agriculture provides the livelihood of nearly two-thirds of Yemenis, the country also relies heavily on imports of staple crops.

At the same time, service infrastructure has collapsed and government safety net programs have been suspended, handing an extra blow to millions of poor households.

In a very challenging field environment, FAO and partners have since 2014 been working to support local farmers and internally displaced people to strengthen their livelihoods by distributing crop production packages, home gardening kits and fisheries inputs. They have also provided vaccinated poultry and goats for backyard livestock production.

Additional animal vaccination drives and plant health campaigns have helped farmers protect their agricultural assets, such as livestock and trees, from disease and locust threats.

Since 2014, more than 90,000 people (13,450 families) have benefited from these FAO programs. Security conditions permitting, the Organization aims to reach nearly 235,000 people through its 2014-15 response plan for Yemen, but more funding is needed. Currently, only $4 million of the required $12 million have been made available for the livelihood programs.

“Even before fighting intensified this spring, Yemenis were in dire need of support to build up their agricultural production,” said Abdessalam Ould Ahmed, FAO Assistant Director-General for North Africa and the Near East. “The deteriorating situation means we need to double down on our efforts to ensure that as many farmers as possible are able to plant this growing season and strengthen their ability to withstand future shocks.”