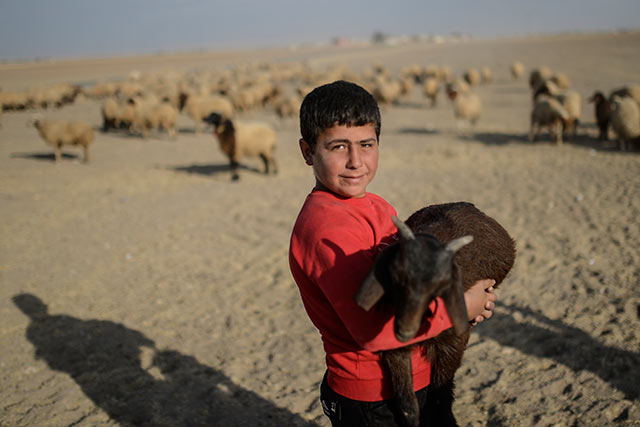 Some $121 million are urgently needed to prevent further deterioration of the food security situation and the collapse of regional food chains amidst the ongoing crisis in Syria, which has severely disrupted agricultural production and trade and left some 9.8 million people food insecure, FAO said today.

“We need to provide additional assistance to farmers to help them rebuild agricultural infrastructure and livelihoods, or we will see the food security situation continue to worsen,” said Abdessalam Ould Ahmed, FAO Assistant Director-General and Regional Representative for the Near East and North Africa.

The Third International Humanitarian Pledging Conference for Syria, which will take place in Kuwait City on 31 March, presents an opportunity to raise critical funds to strengthen agricultural production in communities across Syria and neighbouring countries.

Now in its fifth year, the Syria crisis has displaced more than 11 million people, of whom close to 4 million have fled to neighbouring Egypt, Iraq, Jordan, Lebanon and Turkey. Some 85 percent of these refugees have settled outside of camps – many in rural areas where agriculture is the livelihood of the poorest families.

In Syria itself, some 50 percent of livestock have been lost and the cereal harvest has dropped by half since the beginning of the crisis in 2011 due to conflict escalation and adverse weather.

Along with growing pressures on resources like water and land, the movement of people and livestock has also raised the risk of animal and plant diseases spreading across borders within and beyond the region. This is in part due to the collapse of the veterinary services in Syria, which has left thousands of animals unvaccinated.

Boosting agricultural production is essential to ensuring a steady food supply in Syria and the subregion, which has seen an increase in food prices that is particularly affecting the 75 percent of Syrians currently living in poverty.

This week’s pledging conference aims to raise the funds required to meet the needs outlined in the 2015 Syria Strategic Response Plan (SRP) and the Regional Refugee and Resilience Plan (3RP) 2015-2016. In all, responding to the crisis in Syria and its spillover in the region will require $2.9 billion and $5.5 billion, respectively, according to the UN Office for the Coordination of Humanitarian Affairs.

Under these plans, FAO is seeking $59 million for its work in Syria to support the production of staple foods, improve families’ nutrition and income, protect their livestock, and improve the way that governments, aid agencies and communities coordinate to build food security. These funds will assist more than 1.5 million people.

Another $62 million are needed to help host communities in Iraq, Jordan, Lebanon and Turkey cope with the influx of refugees by making their agriculture more productive and sustainable. These measures include preventing animal and plant diseases, supporting backyard farming and developing value chains.

These interventions build on FAO’s existing work across Syria, which has supported the livelihoods of close to a million Syrians since the start of the conflict in 2011.

In 2014, some 238,000 people received seeds that produced enough cereals to feed more than 420,000 people for a year. Another 24,500 people received vegetable packages that allow them to grow more nutritious foods, and some 45,000 hens which are expected to produce nearly 9 million eggs for families in Syria. Meanwhile, more than 1 million animals were treated for parasites and some 7,600 small livestock keepers received feed for their animals last year.

“Food production is the backbone of rural livelihoods,” said Laurent Thomas, FAO Assistant Director-General for Technical Cooperation. “However, farmers are facing enormous challenges and they need urgent support to protect Syria’s already tremendously damaged agricultural production. This is not only crucial for improving the lives of millions of people in Syria but for food security and stability in the region as a whole.”