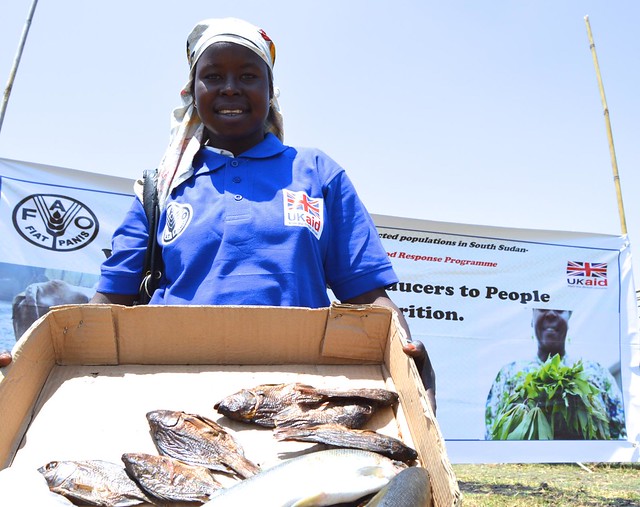 In the early weeks of the South Sudan crisis last year, thousands of families crossed state borders from Jonglei to Nimule, Eastern Equatoria State to escape violence and fighting. Until March 2014, these IDPs were staying with their host relatives, scattered in churches and schools, and living under trees in town. Since, they have moved to Melijo, a camp that has been home to 5 000 IDPs from Jonglei State for fourteen months. The families who migrated with little or no belongings have survived on food rations as there was only one small market in the camp, with a scarcity of food commodities. Most women have to walk up to two hours to reach the market in town for items like fresh fish and vegetables.

FAO South Sudan implemented a DFID-funded project in the area titled, “Emergency livelihood support to crisis-affected populations in South Sudan-FAO South Sudan Emergency Livelihood Response Programme.” The project aims to provide time-critical livelihood support to conflict-affected displaced and vulnerable populations in order to enhance food security and diet diversification for vulnerable households. The project is targeting over 1 200 beneficiaries in the area with a new voucher scheme.

The voucher scheme component of the project is linking local producers in the host community to consumer IDPs in Melijo. Not only does the programme provide a platform for fishers, farmers to sell their produce, but it brings the market to the IDP camp, to ensure better nutrition and food security for displaced families. Over the last few months, FAO and partner Healthlink have trained hundreds of people involved in the programme. Among these were 40 local fish suppliers, 60 vegetable producers, hundreds of IDPs, community mobilizers and HealthLink staff who were also given hands-on training.

On 27 February, FAO South Sudan and DFID went on a joint mission to Nimule to get an overview of the project implementation, meet with partners and engage with beneficiaries. The teams participated in a market simulation with suppliers and vendors, to understand the market day structure and activities. The market days take place three times a week and each family receives three vouchers for vegetables, milk and fish. Each market day is monitored and assessed by the partners and conflict management staff is on-hand during all transactions. Additionally, each market day is followed by a comprehensive market review meeting attended by all stakeholders.

After the joint mission, the official voucher launch took place on 9-11 March 2015. Fresh milk arrived first to the market and fish was abundantly available in different varieties. Vegetables, including okra, amaranth, kale, eggplant, tomatoes and onions, were proudly displayed on the tables for purchase. Remarking on the success of the voucher scheme launch, Dan Opiyo, FAO South Sudan Voucher Expert said, “Suppliers had to rush back to Nimule stores to replenish their onion and tomato supplies for the IDP familes.”

The community members reported that June and July are the toughest months of the year for accessing food, so the project’s launch was crucial to help communities at the time when they need it most. Not only are the vouchers helping to feed families and generate income for local fishers and farmers, but they are part of the building blocks for resilience and peace within communities.