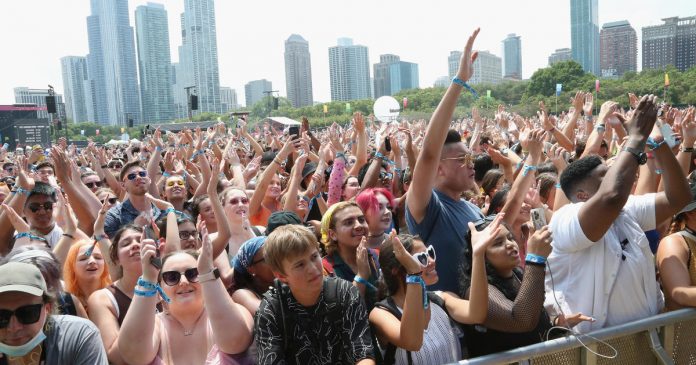 The Lollapalooza outdoor music festival is underway in Chicago, causing some concerns as the delta variant causes COVID cases to surge across the country. But organizers of the four-day event say proof of vaccinations or negative test results have been required for entry.

More than 90% of concertgoers showed proof of vaccination on the first day of the festival, the organizers said, while 8% showed proof of a negative test result. They said 600 people were denied entry for showing up without the necessary paperwork, and if you’re unvaccinated, you’re required to wear a mask.

Despite signs reminding those concertgoers to wear masks, few are have been seen wearing them, and it’s unclear how they’re being enforced. Brad Watson, a vaccinated concertgoer, said he was “a little uneasy” and “a little nervous because of all the breakthrough cases.”

“I’m not going to get up as close to the artists because it’ll be crowded there,” Watson told CBS Chicago. “I’m going to keep my distance.”

The City of Chicago said it worked closely with the organizers ahead of the festival, which includes headliners Foo Fighters, Post Malone, Miley Cyrus, and Tyler, the Creator. Still, the thought of nearly 100,000 people packed together worries Dr. Emily Landon, an epidemiologist at the University of Chicago.

“I’m not so worried for Chicago, but I am really worried for those little towns or small places in unvaccinated America that have sent some of their teenagers to Lollapalooza, for a really good time,” Landon said.

Across the country, new COVID cases and hospitalizations are slightly higher than they were last summer, and nearly 35,000 vaccinated people per week are coming down with “breakthrough” infections. Out of the 164 million people who are fully vaccinated, that’s .02%.

Meanwhile, more major American companies said they will require vaccines for employees, including Disney and Walmart. And you’ll also need the shot to perform or watch shows on Broadway.

The CDC is now warning that vaccinated Americans can transmit the Delta variant as easily as those who are unvaccinated and that the variant appears to cause more severe illness and deaths. But the agency also says that 97% of those hospitalized with COVID-19 have not been vaccinated.

“I’m worried that this is just the beginning of a pretty big surge across the South,” said Dr. Peter Hotez, of the Baylor College of Medicine. “Anyone who’s not been vaccinated yet or not recently infected, there’s a high likelihood they’re going to get COVID over the next few weeks.”

“As bad as this is, I worry it’s going to get worse as the school year opens and there’s going to be a lot more transmission,” Hotez said.

Justin Carissimo contributed to this report.