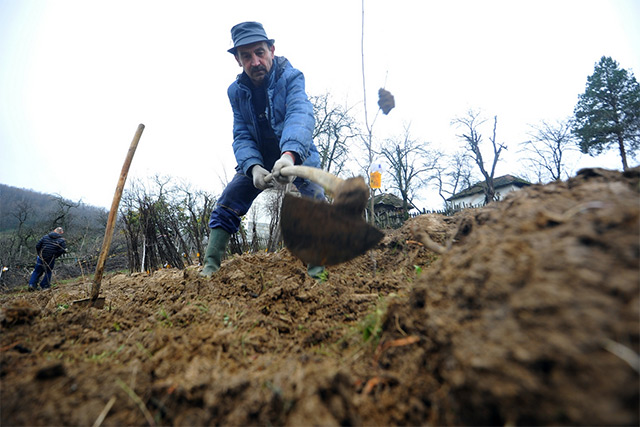 After last spring’s record rainfall in Southeast Europe, Serbia watched historic floods submerge towns and overrun the countryside. Rural villages and farms took the brunt of the impact, as high water and landslides drowned livestock, destroyed crop seed and animal feed supplies, and washed away newly sown fields along with the hard work of the spring planting season.

In response to the unprecedented natural disaster, FAO undertook a comprehensive emergency response effort thanks to the European Union’s support. The EU dedicated EUR 8 million from its larger EUR 30 million flood-recovery package to specifically support Serbia’s agricultural sector and restore the livelihoods of the nation’s small-scale farmers.

Taking stock of the situation

Before flood waters fully subsided, an FAO emergency response team was on the ground in Serbia to evaluate the damage. With EU support, the team spent extensive time listening to municipal leaders, water managers and residents in order to assess local needs and identify the most vulnerable rural families affected by the floods.

After gathering local input, the EU and FAO delivered a recovery programme to help farmers jump-start agricultural production in the aftermath of the floods. But the response is also reinforcing the long-term viability of family farming in Serbia by supporting local farmers who invested in their land and rebuilding rural communities in a way that increases resilience against future disasters.

Twenty-three different crop and livestock packages were developed, to help the hardest-hit farmers get back on their feet. The international team partnered with the Serbian government and municipalities to deliver animal feed, wheat seed, fertilizers, fruit seedlings, farm equipment and machinery, greenhouses, beehives and animal stocks. The emergency supplies were procured on the local market as much as possible to support Serbia’s economic recovery after the floods.

“Right from the beginning, we knew how important it was to help protect the investment of families whose farms suffered severe losses as a result of the floods,” said Vladimir Rakhmanin, the FAO Assistant Director-General and Regional Representative for Europe and Central Asia. “Together with our partners, we aimed to help Serbian farms recover and get back to producing as soon as possible.”