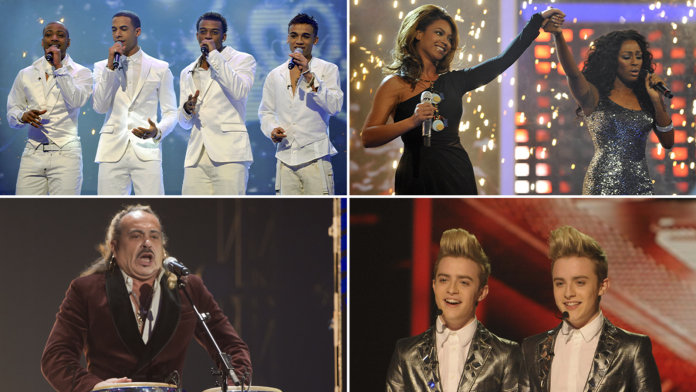 The X Factor was nothing short of a cultural phenomenon when it launched in 2004 on ITV.

As well as giving the world some of the most popular artists of all time – such as One Direction and Little Mix – it was also known for its special mega-guest stars, comedic auditions and outrageous scraps.

ITV has now said there are “no plans” for another series of The X Factor. In the talent show’s honour, we’ve rounded up just some of its most memorable moments.

During the final in the 2008 series of the show, Beyoncé shocked viewers across the UK by turning up to sing a duet with contestant Alexandra Burke, who went on to win the show.

Starting to sing Listen from Dreamgirls, Burke went on to say: “Ladies and gentlemen, I absolutely cannot believe I’m about to introduce this woman to the stage. Please welcome, my hero Beyoncé.”

Burke told Beyoncé that she had made her “dreams come true” after their performance. The A-lister returned the praise, telling the judges: “She’s a superstar. Such a beautiful voice and such a beautiful young lady. I’m very, very happy to sing with you tonight.”

Other guest stars throughout the years included Robbie Williams (who came in too early on his own track, Angels) joining Olly Murs. George Michael came on stage to join Joe McElderry, while Michael Bublé performed a duet with Stacey Solomon.

It’s not only a highlight in The X Factor’s history – it’s probably one of the best moments we’ve seen on British television.

Okay, that might be a bit of an exaggeration, but Rylan crying in front of Nicole Scherzinger after being told he’ll be in the live shows is truly memorable.

Before he was known as one of the kings of light entertainment, Rylan Clark appeared on The X Factor in 2012, and was mentored by The Pussycat Dolls lead singer.

After being told he would be performing in the Saturday night live shows during the Judges’ Houses stage (read: plush hotel in Dubai) he launched into an uncontrollable crying fit.

He admits in his autobiography that it lasted 23 minutes, and that paramedics had to be called. That was after rubbing his face on the hotel’s $2,500 Versace cushions – whoops!

Clarke came a respectable fifth that year, with the crown going to James Arthur.

The “novelty” acts that managed to win over the British public

They were often relentlessly mocked, but sometimes the acts the judges hated were the ones we loved the most.

Yes, I’m talking about the likes of Jedward, Wagner and Honey G – who all went great guns in the live shows, despite judges often feeling like they shouldn’t.

Jedward (who have since turned on the show and celebrated its downfall) were the excitable teens with spiky hair who were mentored by fellow Irishman Louis Walsh.

Their well-produced, energetic performances often drew some pretty sharp criticism from the judges – but it didn’t seem to matter because they were fun. John and Edward came sixth in 2009, proving they won a sizeable fan base among the British public.

The pair went on to have a pop career AND represent Ireland at Eurovision… twice. They are now advocates for a number of good causes and both have modelling contracts.

Elsewhere, 2010’s Wagner is largely remembered for singing most of his songs while playing his bongo drums – and landed in sixth place thanks to public votes.

While Honey G from 2016 was largely branded as a novelty act (including by judge Nicole Scherzinger), she controversially rapped her way into fifth place.

But that support only went so far – she released a single called The Honey G Show on Simon Cowell’s record label, which only peaked at 149 in the charts.

Cousins and best friends Abbie and Lisa came together to perform as AbLisa (clever) and made it on to the arena auditions in 2010.

Things went south from almost the minute they stepped on stage though – calling Louis Walsh an “old man” and telling the audience to “shut up” when they began laughing at them.

They sang an out-of-time and out-of-key version of That’s My Goal – a song by former winner Shayne Ward – for the judges and the now hostile crowd.

Of course, the panel made their true thoughts known to the pair before Lisa asked Natalie Imbruglia: “Who are you?”

It got heated on stage, which culminated in Abbie punching Lisa and walking off stage.

The pair were kept apart backstage after their small tussle, with Dermot O’Leary telling Abbie: “You cannot strike people.”

Unsurprisingly, it was four noes – but their clip has been seen more than 130 million times on YouTube.

The auditions – especially the bad ones

It’s why most of us tuned in, right? To see some of the truly awful auditions that made the cut.

There are of course too many to remember, but among those that stick are the likes Ant and Seb giving us their best rendition of Mysterious Girl (“come on, move your body”) or Debbie Stevens who reacted to negative feedback by saying she wanted to slap Louis Walsh.

Other notable auditions that will stick in our heads for years to come include Holly, who became known as “cave mouth”; Kelly, whose family intervened after her multi-key performance of I Will Always Love You saw her rejected; and Onkar, who slammed to his knees at the culmination of his Earth Song rendition.

And who can forget Rachel Lester, who Simon Cowell said was his worst audition ever. She told judges “whatever song you want me to sing I’ll do it” – adding she was better than most big singers.

That’s a bold claim for someone that walked away with four noes after a pitchy (at best) performance of Sugar Walls by Sheena Easton. It then descended into chaos – and she used some fruity language to tell the judges what she really thought of them before security dragged her out.

Even the tightly produced live shows gave us some unexpected moments.

It might be niche, but the holler of “ONLY THE YOUNG” from the crowd every week in 2014 got the nation talking.

Like clockwork, the group’s biggest fan would scream the band’s name during the elimination section of the show every week.

The stunt prompted articles, radio discussions and copycats at other events.

Lee Nelson made The X Factor his victim in 2014 – by jumping on stage to perform You Are Not Alone with Stereo Kicks.

The comic appeared next to the lads and tried to fit in before security grabbed him.

Both Cowell and Walsh were frantically waving their arms to try and force Nelson off the stage.

And what about the over-enthusiastic “Merry Christmas” from JLS’s JB during their Last Christmas performance in 2008?

Seemingly innocuous, it went on to inspire memes that are still used today – including on TikTok.

It also made Harry Hill’s TV Burp – with the comic relentlessly mocking the moment.

And finally… the judges

The shows revolving door of judges gave viewers some of the best moments in The X Factor’s history.

Among some of the best moments is Louis Walsh and Sharon Osbourne having to be told off by gaffer Simon Cowell one year for bursting into uncontrollable laughter after a particularly bad audition.

They were sent into the corridor to go and chill out – but matters were made worse when Osbourne walked into a door – setting the pair off yet again.

And in 2012, Gary Barlow and Tulisa came to blows – when the Take That star responded to criticism from the N-Dubz singer by saying: “I don’t know what offends me more, those comments or that fag ash breath.”

Barlow later apologised for his comments, but Tulisa quickly retorted with: “Just a note for Gary – lay off the red wine, coz’ I can really smell that as well.”

The X Factor, we will miss you.