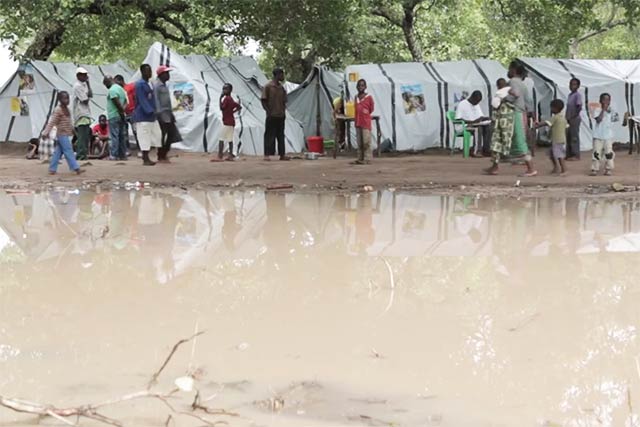 “My house has been flooded. I couldn’t take anything out of the house. My pots, my clothes and blankets, everything disappeared with the water” says Admira Maurício, 29, a single mother from Nicoadala District in Northern Mozambique. Her mud house easily collapsed under the unrelenting rain and her little backyard garden was quickly submerged. What she and her children now call home is a temporary tent erected on higher ground with other families.

Mozambique has a long history of floods. Major floods have been recorded in all the international river basins shared by Mozambique. In early 2015, Incessant rains pounded the country’s central and northern provinces, leading to floods that left a trail of destruction. Fields were flooded, communities isolated, bridges and roads destroyed, electricity and telecommunication infrastructure shattered. According to the Ministry of Agriculture and Food Security, over 50 000 hectares of farming fields were flooded, leaving more than 37 000 families – like Admira’s – in a dire situation.

The Food and Agriculture Organization of the United Nations (FAO) went on a nine-day assessment of the damage of the floods. “We had to walk long distances on semi-destroyed paths. The roads were cut off and access to some communities remains only possible by boat, bicycle, motorbike or even on foot,” says Jacinto Mutambe who was a member of the team. Felicidade Panguene, another team member adds: “Many people lost their entire crop, their farming tools and livestock. Many lost their houses and other household items. The people have lost their livelihoods”.

A total of 49 temporary shelter centres, like the one in Nicoadala where Admira is staying were established as a result of the floods. Women and girls have become very vulnerable as they face the risk of gender-based violence and HIV infection. Girls may enter into early marriages due to the lack of food and in many cases the loss of livelihood for many families.

A twin-track approach of meeting the immediate needs of vulnerable populations while building the longer-term resilience of the communities is being implemented. “Throughout the next six months, FAO and other partners will facilitate the distribution of necessary quality seeds – both crop and vegetable – as well as farming tools to 11 000 farmers in the affected provinces”, said the Castro Camarada, FAO Representative in Mozambique. “While this will assist them resume immediate small scale production on their farms, we need to work with them and a broad range of partners develop their capacities to withstand future shocks”.

Mr Camarada further explained that although activities have already begun, the Organization is still seeking USD $ 7 million within the United Nations Response and Recovery Proposal (RRP) to assist an additional 44 000 farmer families within this twin track framework. “I lost everything, my animals and my field. I don’t have food or work. Everything now depends from the water receding so that we can resume our activities. If it doesn’t recede soon, it will be a tragedy. There will be hunger, much hunger,” said Edson Pequeleque, 54, a father of six, who like Admira is staying in Nicoadala accommodation centre.

“As we carried out our assessment the words that we heard mentioned over and over again were; ‘food’ and ‘seeds’. The expectations are high and the responsibility bestowed upon us all is immense. FAO as a co-lead of the UN food security cluster (together with the World Food Programme), will continue to intensify the response coordination to ensure that the right assistance reaches those who need it most at the right time”, said Jacinto Mutambe.