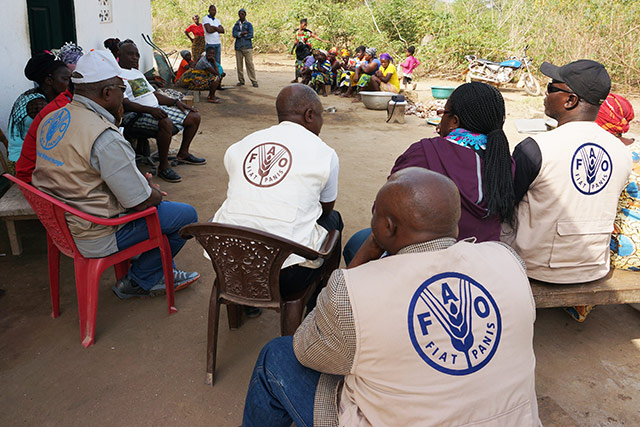 Oliver Kekeh is Director of the Agriculture Training Centre run by the Catholic Church in Sanniquellie, the capital of Nimba County in Liberia. He guided FAO team members during their recent visit in this region hardly hit by the Ebola outbreak. When they arrived in Sehyikimpa, a small town on the main route to the Liberia-Guinea border, he explained: “The town we are going to visit was hard-hit by the virus. At least 10 people died there, eight of them from one family. The survivors, up to now, have received no help.”

At the church, the FAO team met with members of the community and was warmly welcomed. “Most of these people rely on agriculture to produce their food and earn some income. They grow rice, pepper and bitter balls and are also involved in little susu money savings. That’s before Ebola. But now things are quite slow,” said Oliver. In the church, he told the community “We are very grateful to God first and to FAO second for coming to see us. We hope they help us with our agriculture, susu [savings] and fighting Ebola work. As you are aware, they are the first agriculture people since Ebola outbreak to come here.”

With funding from the Swiss Development Cooperation, FAO and partners including the Ministries of Agriculture and Gender are reaching out to 3 000 households (over 15 000 people) in the worst affected areas in Lofa, Nimba and Bong counties to contribute to the prevention of the spread of EVD while avoiding damage to the local economy.

FAO has conducted assessment missions and organized consultation sessions with the government, partners and beneficiaries to design activities tailored to the needs of crisis-hit communities. Priority interventions will focus on the provision of inputs to farmers to kick-start lowland rice and vegetable production. Women associations will also receive support to reactivate their local group activities through savings and loans mechanisms and engage in awareness-raising activities at the community level.

Yah Nyeneken is Chair of the Dolakeh Farmers Group in Sehyikimpa, which will receive support from FAO. She lost her husband, was quarantined herself but survived. She now wants to rebuild her life. “My husband died on 20 August 2014. He worked as an Immigration Captain in Ganta City where he got the sickness and brought it here. I did not know he had Ebola, so I took him to the clinic first and then to the hospital in Sanniquellie. When he died the Ebola team came and took his blood and later told me he had Ebola. I and 17 other members of the family were quarantined and all of us survived.” Yah said her primary concern was now to rebuild her life. “I lost everything and up to now nobody has helped me. I want to do my farm and restart my business. I’m happy to see that you are here to help us.”