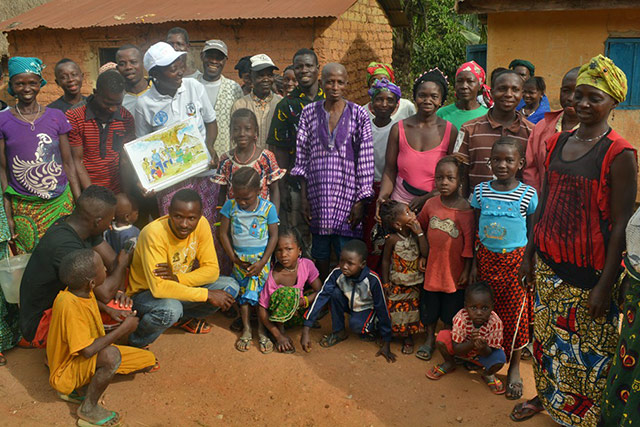 Houndoni, a small village 6 km east of the administrative centre of Gueckedou where the Ebola outbreak was first declared, has been hit hard by the Ebola Virus Disease (EVD) since December 2013. In this village with a population of 300, 27 people have died after contracting the virus. Most of them were active in this mainly farming community, and the impact on agriculture and the local economy has been huge.

Today, thanks to the concerted intervention by the Government of Guinea and its development partners, particularly FAO, the outbreak is now on its way to being a sad memory in the community – no new cases have been recorded in the last three weeks.

Elisabeth Diawara, agent of Veterinary Public Health at Gueckedou’s Regional Livestock Directorate, took part in the communication and awareness-raising training sessions organized by FAO. She has played a key role in the daily battle to stop the epidemic spreading in Houndoni: “FAO gave me the chance to serve my community at a crucial time. I was able to help the farmers with whom we’ve been working for several years as part of my livestock-breeding support and advisory activities. The close contact I had with them during the health crisis allowed me to build up and strengthen my relations with these farmers for future actions,” she said enthusiastically.

From October to December 2014, the rural development agent was able to sensitize 3 150 people from 300 households in the districts of Bambo, Koyata and Gbangbaissa, including 279 in the village of Houndoni. During the awareness-raising activities, she distributed hundreds of hygiene kits and a total of 1 200 soaps and 600 bottles of chlorine. This awareness and distribution operation launched by FAO enabled the inhabitants of these outlying districts, especially of the small village of Houndoni, to be well-informed and equipped with means to prevent and fight the EVD.

“Everyone knows that our community was one of the worst hit by the virus. We lost 27 of our people and it was very hard. We lost people who were dear to us and what’s more, the misfortune that befell our village prevented us from cultivating our fields this year because it was above all a question of surviving. It’s true, we were very reluctant at first, but thanks to the advice of Mrs Diawara, who is well-known here, we accepted and took part in the FAO’s operation to raise awareness and distribute kits. We’d like to thank FAO for helping us stamp out the Ebola epidemic in our village and we’d also like to ask for its help re-launching our farming activities,” urged Yawa Dembadouno, a widow and mother of three.

Elisabeth Diawara is continuing her awareness-raising activities and the distribution of kits in the villages outside the city of Guéckédou, this time using a picture toolkit. It was designed and validated by the National Ebola Coordination Unit and will strengthen FAO’s awareness-raising operations underway since October 2014 in the farming communities severely affected by the outbreak.